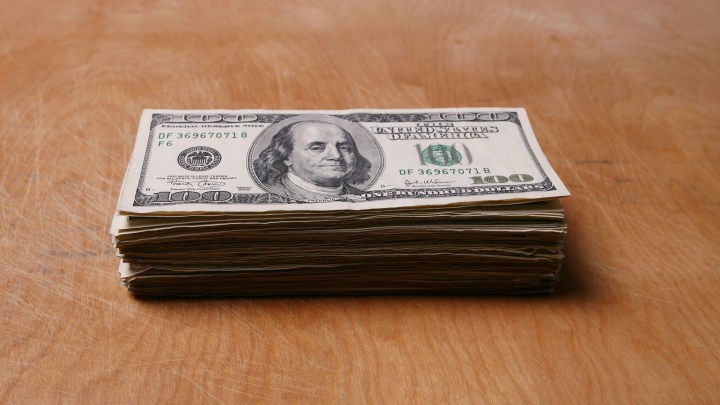 Millions of eligible Americans received an emergency aid payment of $1,200 earlier this year when COVID-19 began shutting down businesses and putting people out of work. Some compared that emergency relief to a kind of Universal Basic Income payment.

But the one-time stimulus payment fell short of being truly “universal” —many people, including tax-paying undocumented residents, were ineligible for the CARES Act financial relief.

Many of those ineligible people were also clients of Mission Asset Fund, a San Francisco-based organization that helps “unbanked” immigrant families integrate into America’s financial system. MAF’s founder, José Quiñonez, launched its own grant aid system to help those people.

“We started what we call a rapid response fund back in March,” Quiñonez told “Marketplace Morning Report” host David Brancaccio. “And in the past four months, we raised close to $29 million to actually provide people with grants of $500.”

Quiñonez and MAF took a data-based, equity approach, prioritizing applicants who were in the most financial need. But the effort was underlined by Quiñonez’s belief in direct monetary aid similar to universal basic income, in both this current pandemic economy and whatever comes after.

“Fundamentally, the idea of universal basic income is something we need to think about hard as a society, particularly as we evolve into this new economy where work is going to be different,” Quiñonez said. “We need to tie our sense of dignity as a people, as a community, to more things other than just our work. When you tie it to a sense of connection with one another, I think [with] that we can resurface as a stronger nation.”

The following is an edited transcript of their conversation on the need for a universal basic income system and why we need to think hard about how to use to meaningfully reduce inequality.

David Brancaccio: So you think an idea that got a big test during the pandemic should be normalized? We’re talking about those $1,200 checks, right? Those were a kind of a universal basic income.

José Quiñonez: It was, and it was a lifeline. And then in the moment of crisis, when people are not able to work, when people were laid off from working and there was no income coming in, those $1,200 [checks] that people received, it definitely made a significant difference in their lives. And so we need to do more of that as the pandemic and the crisis continues. However, a lot of our clients were actually kept out from that support, from that aid. And so we need to also think about them as well. You know, because income, cash coming in so that people can survive through this pandemic and post-that, is really critical.

Brancaccio: Who didn’t get it? I mean, they based it in part on previous tax returns that have been filed. But there are also some people who have moved. There’s some people who may be, I guess, unbanked.

Quiñonez: Well, interestingly enough, people that were paying into the tax base, people with [Individual Taxpayer Identification Numbers], they were actually excluded from assistance. These are immigrants that may not necessarily have a Social Security number, but because they file taxes, pay taxes through an ITIN number, they were not allowed to get assistance. I mean, you even have families who live in what is known as mixed-status households — you may have somebody that files with a social security number, but if they’re married to a spouse with an ITIN number, and if they file jointly, they were excluded from assistance. I mean, and it goes on and on to the point where millions of people that need help, people that are essential workers, people that are out there working, either picking fruit or restocking shelves or even delivering food to our homes, they were actually excluded from assistance. So to me that question about this universal basic income concept is that we really do need to put emphasis on the word “universal,” because we all need help. And the most basic component of that is getting income so that they can continue to pay their rent, pay their food, pay their bills to keep on surviving. Because without that, how do they do it? I mean, how would they earn income if they’re not being allowed to work or if they can’t work, right?

Brancaccio: But if we imagine a future, I don’t know when it is, at some point, and unemployment comes down again, gets down below 10%, gets down below 5% and gets close to what the economists call full employment, you still think there would be a role for a universal basic income and, if so, who would get it in that situation?

Quiñonez: I think the reality is that some people have talked about universal basic income even before when we were realizing that our economy was actually shifting into a lot more automated jobs. We were talking about how robots were going to come in and do our jobs. And so that idea of universal basic income kind of took hold, knowing that this future of automation was going to have less jobs. And I’m afraid that through this pandemic, through this crisis, we just kind of sped up to that future. People may not be able to come back to those jobs, or it may take years and years before we reconstitute what this economy is all about, so that we can create different jobs, new jobs, better jobs.

Quiñonez: Yeah, that’s right. And I don’t argue that there is no dignity in work. I believe that there’s dignity and purpose in work, and I believe that to my core, but I also think that there’s dignity in helping each other out. And particularly when people are not able to work for no fault of their own. We have to be there for each other and really, you know, see that the oneness and the wholeness of our country and of our society. And that means really helping everyone that needs help. And I think dignity comes from that. It’s about recognizing each other at that level, and providing help while we’re going through this transition.

“Through this pandemic, while we see that we’re all being impacted, we know that some communities are being harmed disproportionately, and those communities were the ones that were actually left out of any assistance from the federal level.”

Brancaccio: We’re already worried about intense disruption to the labor force that would be caused by, increasingly, automation and software and robots and artificial intelligence coming online. We have the pandemic now, but we also have that process, and a universal basic income would help take the edge off that transition, the technological one, as well.

Quiñonez: That is right. And I think that’s what this pandemic has sped up, that process. I mean, look at us, you know, we’re doing this interview from our homes. We’re using technology even more so now than before. And now, digital-first is the first thing that people do. Companies are starting to re-envision how they provide services and build products through a digital-first strategy. And so that future, that we thought was in the future, is happening right now. And so I think that’s why we need to think about what do we do, how do we support people through this transition. And so for me and what we do at MAF, we’re trying to focus on people that were left out, particularly from the CARES Act, because being left out, being denied help, while being expected to continue to be out there working or being denied a job so they can sustain themselves, we need to step up and do something for them. We started what we call a rapid response fund back in March. And in the past four months, we raised close to $29 million to actually provide people with grants of $500. So while we’re thinking about what’s going to happen in the future, we also have to be mindful of those concerns as those problems are happening in real-time right now. And we need to do something about it.

Brancaccio: In a sense, you created a supplemental, smaller-scale but still significant universal basic income through your organization.

Quiñonez: Yeah and I wouldn’t call it that. But I think that’s exactly what we’re trying to do. We’re trying to say,  look, people need cash now. Yes, they need loans, yes, they need to save, yes, they need other sort of efforts to help them retool and figure out how to engage in the new economy, but while we do that, they still need cash now and that’s important. So we’re learning a lot about how do you actually target that cash effort. But, for us, the impetus of that work is to say that, through this pandemic, while we see that we’re all being impacted, we know that some communities are being harmed disproportionately, and those communities were the ones that were actually left out of any assistance from the federal level. Because of that, we needed to rally, and we engaged philanthropy, we engaged nonprofits, we engaged corporations to step in where the federal government left us out. Of course, not to the same level, not to the same degree, but just to show that we need to do this and we cannot not do it. That’s not an option. But fundamentally, the idea of universal basic income is something we need to think about hard as a society, particularly as we evolve into this new economy where work is going to be different. And we need to tie our sense of dignity as a people, as a community, to more things other than just our work. When you tie it to a sense of connection with one another, I think [with] that we can resurface as a stronger nation.

Brancaccio: What have you learned about actually distributing those $500 grants? Are there some ways better than others to actually get the cash into the hands of people?

Quiñonez: Yes, definitely. We did not do a first-come, first-served approach, because that approach always leads into furthering inequalities. Instead, we did a data-driven, equity-based approach of helping people and finding people who were the last and the least. And then once we did that, from the application process, we were able to do direct deposits, send paper checks, even prepaid cards, giving people options on how to receive funds. But, fundamentally, the concept of equity-based grant-giving is something that we need to lift up, and how to make that happen. Because, you know, there are people that have no income, that have families, children in their home, without any source of income to buy food. And so this idea of equity-first giving is something that we’re lifting up as an alternative to this first-come, first-served basis that, in my mind, actually furthers inequalities in our society.