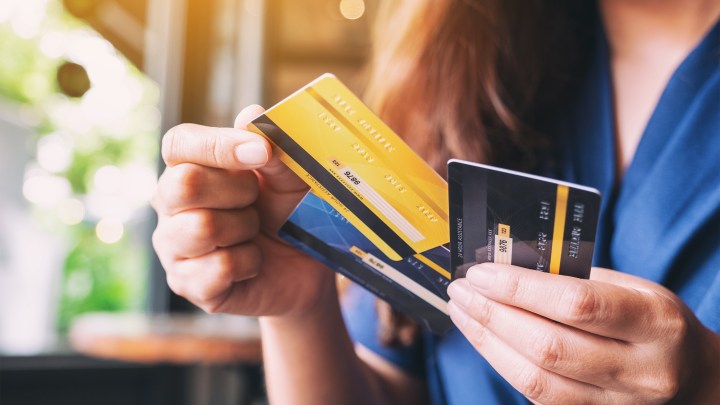 COPY
The changes in household debt in the second quarter were driven by a decline in credit card balances as consumer spending dropped. iStock/Getty Images
COVID-19

The changes in household debt in the second quarter were driven by a decline in credit card balances as consumer spending dropped. iStock/Getty Images
Listen Now

Household debt fell in the second quarter of this year — the first decline since 2014. But our lower debt load appears to be the result of government pandemic relief programs. And some of them, like the $600-a-week supplemental unemployment benefit, have expired.

The report says credit card debt was down by $76 billion in the second quarter, the steepest decline in card balances since the New York Fed started tracking them. One reason? People aren’t going out as much.

But Jay Shambaugh, professor of economics at George Washington University, said there’s something else going on.

“Many people don’t put their money in a savings account — they don’t have an active savings account,” he said. “What they have is a credit card balance that fluctuates. And if they get a jolt of income, they’re going to pay down the balance.”

That jolt of income? It was the $1,200 relief checks and the $600-per-week unemployment supplement — which just expired. AnnElizabeth Konkel, an economist at the job site Indeed, said the $600 weekly payments were roughly 5% of all disposable personal income in June. To make ends meet without them?

“At first, it would be digging into one’s savings and after that probably turning towards the credit cards,” she said.

But credit cards may not be an option. Joelle Scally, a senior data strategist at the New York Fed, said banks have cut their credit card customers’ credit limits. She added that low-income consumers may have as little as $150 of available credit to begin with.

“For lower-income borrowers, they really may not have very much credit at all to draw on,” she said. “This reduction in credit limits may actually affect them.”

So people in precarious financial situations are caught between the end of some benefits and having no — or very little — credit to turn to.