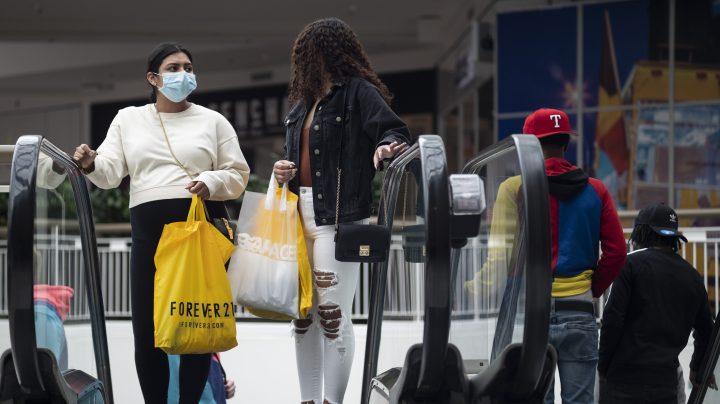 With states reopening, Americans are starting to feel better about the economy than they have in the last couple of months, but only slightly.

Consumer sentiment is higher now than it was in May, but overall, most people are still feeling pretty pessimistic about the economy and their own financial situations, according to the University of Michigan’s index of consumer sentiment.

“The improvement is simply consumers recognizing that the economy is reopening, business conditions are improving and their employment is starting to improve,” said Richard Curtain, chief economist for the Surveys of Consumers. “But it is a long way from the kind of situation we would call consumers optimistic or confident of their economic future.”

Confidence in the economy is nowhere near where it was before the pandemic began, and doesn’t look like it will rebound any time soon. Two-thirds of people surveyed said they are expecting the next year to be bad; about half are expecting a number of downturns over the next five years.

“They don’t think this current situation is over,” Curtain said. “A lot of households have become behind in their mortgage payments or their rent payments or their other payments, and they’re facing difficult times ahead. I think most households, where they thought a year ago that the economy would continue to expand over the years ahead, now consumers are much more likely to expect … more volatile economic times during the years ahead.”

There is a stark split, though, in how Republicans and Democrats are feeling.

“We’re living in two different countries with two different views of what’s going on in the economy and in the world,” said Laura Veldkamp, a professor of economics and finance at Columbia Business School. “Republicans seem to report that the economy is doing great, that things are mostly as good as they were just before the pandemic hit … Democrats seem to think that we’re not in a good economy, and that it got a lot worse with the onset of the COVID-19 pandemic.”

Overall, the level of uncertainty people are feeling about their own income and job prospects is higher than it’s been since 1960, according to Curtain. Confidence in the Trump administration’s economic policies, meanwhile, is lower than it’s been in the last four years — another bad sign for the recovery.

“For consumers to be optimistic and confident about their future, they have to have that optimism and confidence about economic policy,” Curtain said. “If they had more confidence in current economic policies, they would be more willing to make these spending decisions thinking that the economy would certainly improve.”

The fact that so many people right now are feeling uncertain and pessimistic means they are much less likely to buy things that are not essential.

“If I’m scared, I’m probably not spending,” Veldkamp said. “Our natural instincts as human beings in the face of fear is to gather everything we have together, and hunker down. And that’s really devastating for certain segments of the economy.”

Even once the pandemic has passed, Veldkamp expects that fear is likely to linger to some degree.

“We’ll still remember the fact that pandemics can happen and that’s going to influence our behavior for a long time to come,” she said. “There’s a good chance that years from now, you may still have a little bit of a queasy or adverse reaction to the idea of going to a packed stadium or concert hall.”

And if the past is any indication, that could create a drag on the economy that will last for years.

“People who were young adults and teens during the Depression… for the rest of their lives they behaved differently,” Veldkamp said. “We may see a similar sort of scarring that we bring forward with us the rest of our lives from people who’ve lived through this episode, and are old enough to remember it.”