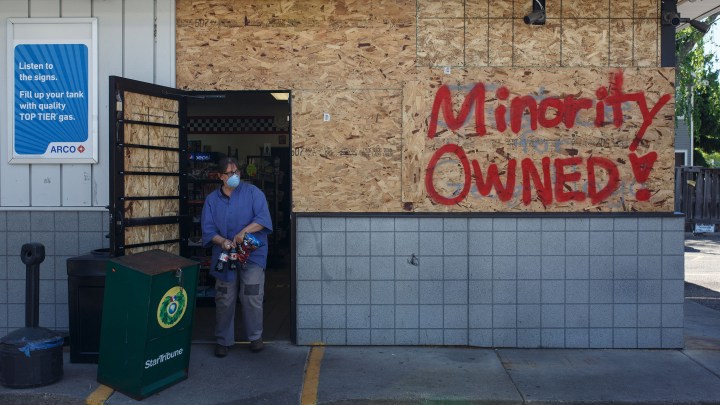 COPY
Small businesses owners, some of whom were looking forward to reopening today in Minnesota, were instead left pleading with protesters to spare their businesses. Kerem Yucel/AFP via Getty Images
Race and Economy

Small businesses owners, some of whom were looking forward to reopening today in Minnesota, were instead left pleading with protesters to spare their businesses. Kerem Yucel/AFP via Getty Images
Listen Now

Businesses big and small have been targets when peaceful protests have turned destructive. Some company leaders are acknowledging the injustice driving the reaction to the events in Minnesota.

A number of major retailers have had stores damaged or have had to close locations. Target closed or curtailed hours at some 200 stores. CEO Brian Cornell said the killing of George Floyd had “unleashed the pent-up pain of years.”

Apple, which was just reopening some of its retail outlets, closed them again over the weekend, and several were damaged. CEO Tim Cook condemned Floyd’s killing in a letter to employees.

“We are monitoring activity around our stores and are adjusting store hours or closing as needed to ensure the safety of our Team Members,” a Whole Foods Market spokesperson told Marketplace. “While there has been damage to several of our stores in recent days, that is not our highest priority at this time.”

A spokesperson for CVS Health says that more than 250 of its pharmacy locations in 21 states have experienced varying amounts of damage, but no employees have been hurt. The company has closed 60 stores for the time being, and it will reopen them when it’s safe to do so and repairs have been made.

“Each closed pharmacy’s phone system has been rerouted to a nearby CVS Pharmacy so all patients will continue to have access to care,” the spokesperson said.

On Twitter, Amazon condemned “the inequitable and brutal treatment of Black people.”

Small businesses owners, some of whom were looking forward to reopening today in Minnesota after the pandemic shutdown, were instead left pleading with protesters to spare their businesses. Hundreds of retail locations were damaged in that state alone. Some small businesses have insurance that will cover their losses, but others don’t.