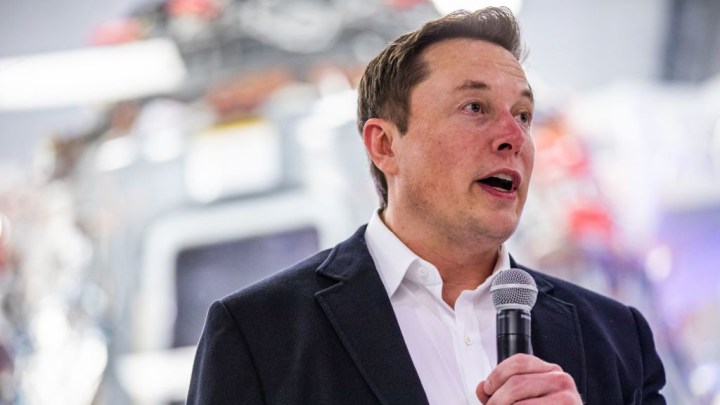 David Brancaccio, Nova Safo, and Alex Schroeder May 12, 2020
Heard on:

COPY
Musk has also threatened to move his operation out of California altogether. Philip Pacheco/AFP via Getty Images
COVID-19

David Brancaccio, Nova Safo, and Alex Schroeder May 12, 2020
Heard on:

Musk has also threatened to move his operation out of California altogether. Philip Pacheco/AFP via Getty Images
Listen Now

Tesla’s Elon Musk says he’s defying government orders and opening up the carmaker’s assembly plant in California. Musk says his business is a special case. All eyes are on local government officials in Silicon Valley and what they’ll do next.

The high-profile showdown is the latest example of the dilemma facing business leaders around the country: When to reopen and how?

President Donald Trump tweeted Tuesday morning that the state of California should let Tesla and Elon Musk open the plant now, adding that “it can be done fast and safely.”

The response from local government officials has been more muted so far. Californa Gov. Gavin Newsom appeared caught off guard during a press conference Monday as reporters peppered him with questions about Musk’s decision, which he announced on Twitter. He said if anyone should be arrested for defying government orders, it should be him, not the 10,000 people who work for him.

County officials said in a statement they hoped to work things out. Tesla was supposed to submit a plan yesterday on protocols and a timeline for returning to full operation at the assembly plant. There’s no word yet if that’s happened.

The location of this particular assembly plant, Fremont, California, in Alameda County, is important. It’s a hot spot of COVID-19 infections. There have been 70 deaths, so health officials have been cautious about reopening too quickly.

But Musk has been critical of the pandemic shutdown as a whole, and he sued over the weekend to reopen his factory.

“Given that they make cars versus, let’s say, services like a Facebook — much different business model, which puts more pressure on them to reopen the factory just given the cash burn that happens every day,” Ives said.

Musk has even threatened to move his operation out of California altogether. But Ives is skeptical — he says that would be a tough and time-consuming thing to do.