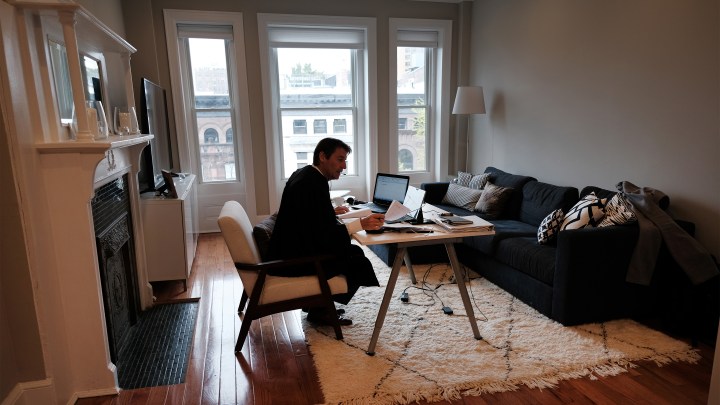 COPY
Lawyers and judges are among those working remotely during the COVID-19 pandemic. Spencer Platt/Getty Images
COVID-19

Lawyers and judges are among those working remotely during the COVID-19 pandemic. Spencer Platt/Getty Images
Listen Now

It was Saturday morning, but Michael Arndt still dressed for work in a button-down shirt and blazer.

“If you come in and you’ve never met a lawyer before, and he says, ‘You know, Saturday is my day off, so here’s my favorite yard-mowing shirt and shorts,’ that kind of gives the wrong impression,” he said.

Arndt is a lawyer with Hawkins Parnell & Young in Atlanta, and normally he defends corporations in product liability suits. But on this day, he was donating his time to the Atlanta Volunteer Lawyers Foundation.

For 40 years, the foundation’s Saturday Lawyer Program has connected low-income Atlantans with volunteer attorneys to help fight poor housing conditions or illegal evictions. It’s one of many pro bono housing assistance programs around the country. With most face-to-face business shut down due to the pandemic, the attorneys have had to adapt. Instead of making the trek to the foundation’s downtown office, Arndt fired up — what else, Zoom — to meet with a potential client.

Turns out the jacket wasn’t necessary. The client, Alisa Jones, had dialed in by phone.

“I’m not your attorney,” Arndt began. “I’m just here to facilitate the process, and hopefully we can find someone that can help you with your case if it’s one where legal action is appropriate.”

Then, Jones dove into her story.

Last October, she told Arndt, she’d found a house to rent using a Section 8 voucher, a federal subsidy for low-income renters. She’d done all the paperwork and had begun moving in her stuff when she showed up and, without warning, found the doors blocked.

Apparently, the landlord had changed her mind.

“So not only did she take my money and run with it, she threw all my kids’ things away, and I still haven’t heard to this day from her,” Jones, 43, said, fighting back tears.

She didn’t just lose her $500. Jones had a deadline to use her housing voucher. When the landlord backed out, she lost that, too.

“I stayed in my car, stayed at hotels,” she said. “I was homeless for a while.”

Back then, she was working as a delivery driver for Amazon. Eventually a co-worker let her stay at her place, but Jones couldn’t bring her four teenage sons.

“Me and my family had to scatter. All of my boys, we’re scattered now,” she said, breaking down. “It hurts so bad.”

Arndt mostly listens. For a lot of clients, this is their first chance to really be heard. Then he gives Jones some options. She can send a “demand letter” to the landlord, seeking damages. If that fails, she can take the owner to court. This is when what’s already hard gets harder. The courts are closed at least through mid-June.

“And even when the emergency is lifted, civil cases will probably move much slower because there’s going to be a backlog,” Arndt told her.

The lack of basic human connection doesn’t help. Arndt has volunteered with the Saturday Lawyer Program in the past.

“There’s just a lot of benefit to walking with them to the coffee room and then walking back, and just kind of gestures and all of those things that kind of come from meeting in person, I think are lost via Zoom,” he said.

Jones also worried about something being lost.

“I just hope that it didn’t block anything from them seeing that I’m just not a lazy person and all the information and documents that I’m presenting is worthy of their time,” she said in an interview after the call. “Maybe they didn’t feel the vibe or something.”

This is where technology can help. Video calls can give lawyers the full picture, said Erica Taylor, director of the Saturday Lawyer Program, pointing to one woman who’d complained about cracks in the wall and ceiling.

“Then she stood up, and she showed them what it was, and I was able to look at it and went, ‘OK, that is not just a little crack,” Taylor said. “Those are huge holes that she had, and we wouldn’t have been able to fully understand that if she hadn’t been able to actually show them, ‘This is what I’m talking about.’”

The program has also had fewer no-shows, she said, because clients can connect from anywhere, without challenges like transportation and child care.

Still, precarious living conditions are going to get even worse as the economy deteriorates and more people have trouble paying their rent. Right now, legal evictions are on hold in Georgia and many states, but Taylor said that hasn’t stopped illegal tactics, like turning off the power or changing the locks. And once the restrictions lift?

“We are deeply concerned,” Taylor said. “We’re basically bracing right now for what we expect is going to be a deluge of filings.”

As for Alisa Jones, the foundation decided to take her case. But since her eviction, she had a car accident on the job and can no longer work. She applied for workers’ compensation for the accident, as well as unemployment benefits, but is still waiting. Her federal relief check hasn’t come either.

She did manage to find an apartment, only now she doesn’t know how she’ll pay this month’s rent, leaving her vulnerable to eviction again.

“This just put me in a very bad position, she said. “And I don’t know where to go from here.”