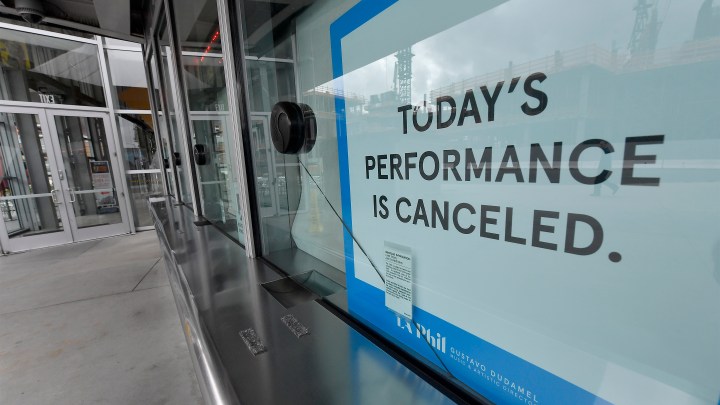 Due to COVID-19, performances like that might be all audiences get for a while. Cities including Los Angeles have said they may ban concerts and large gatherings until 2021.

Jeff Dorenfeld, who teaches music business at Berklee College of Music, said the irony is that live performances were predicted to make $12 billion this year, more than record sales.

“This looked like the biggest year ever,” he said. “Every genre of music had major headliners. So they all could sell out arenas and they all could headline festivals.”

Social distancing has changed all that. Now, lots of musicians are playing from home. Stars like Lady Gaga and John Legend raised more than $120 million earlier this month to help fight COVID-19, with a streamed concert.

“The beauty of these live concerts is, you know, you get to see your favorite artists in their pajamas, and get to meet their dog in their living room and the real piano that they play every day,” said Sofia Rei, who teaches vocal performances at NYU Tisch School of the Arts.

While celebrities like Legend have been playing for charity, smaller, gig musicians have turned online for income. But they can’t draw the same size digital crowds.

“While livestream concerts are a fun way to connect with your fans, it’s not a replacement by any means,” said René Kladzyk, a musician in El Paso. “And the ability to make any real income, it’s just, it’s not at all comparable.”

These days, she’s been posting her music to an artist-owned platform called Ampled, where fans can donate to support musicians.

No one knows exactly when musicians will perform in person again. But it’s likely to start small.

“I think the biggest thing that’s going to happen, when this starts to slowly go back to somewhat normal, they’re going to have to program local artists,” Rei said.