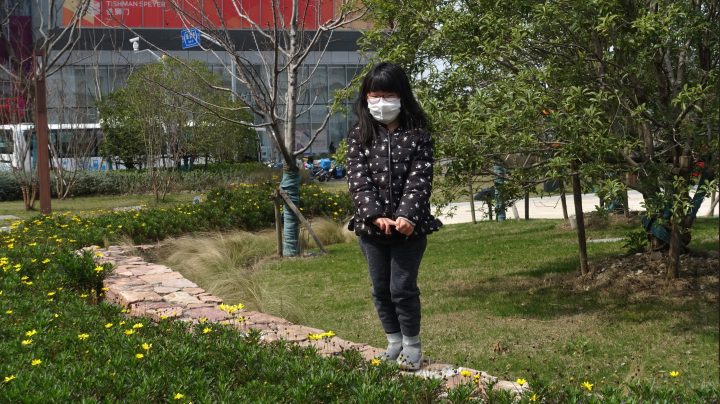 COPY
Ada Lu chats with her classmates in online group discussions every day but she hasn't seen them in person for more than two months and misses playing with her friends. Charles Zhang/Marketplace
Parenting in a Pandemic

Ada Lu chats with her classmates in online group discussions every day but she hasn't seen them in person for more than two months and misses playing with her friends. Charles Zhang/Marketplace
Listen Now

One of the tasks during the lesson is to find square- or rectangular-shaped objects around the home.

Her mother Carol said once she sets up the video lessons on the TV, she doesn’t need to supervise her daughter. For her family, the transition to online classes has been relatively smooth, but there are challenges as her daughter uses distance learning instead of regular school.

“If you don’t understand, if you look lost [at school], then the teacher will come up to you in most cases and [say] ‘Hey, what’s wrong? Do you need extra help?'” Carol said. “It’s impossible for parents to do the same, especially when we’re working from home.”

Schools are slowly preparing to open in China as the country reports it has the COVID-19 virus under control.

Universities and high schools are opening first. Younger students continue to learn online for the time being, which still requires adjustments. Some pupils in China started online courses as early as mid-February.

Excessive screen time is one of the common complaints.

Many students are watching video lessons on tiny smart tablets or cellphones, like 7-year-old Ye Zixuan in central Hubei province.

“My daughter complains sometimes that her eyes hurt and keeps rubbing them,” her father Ye Kun said.

Minutes into the broadcast, the screen went black. A pop-up message read: “This broadcast has violated regulations.”

Fang’s audio was still audible. “My gosh, what did I say?” he asked.

He may never know. A lot of censorship online is done by artificial intelligence.

Then there are the lessons that don’t translate on screen.

A video that was widely circulated online showed a physical education teacher wearing a swim cap and goggles. He dove onto a bed and performed swimming strokes.

The clip was done as a joke, although according to Shanghai parent Yang Weina, it isn’t too far off from the online physical education class her 8-year-old daughter Ada is attending.

“Her P.E. class is so funny. The teacher has to record herself doing all the activities [using] whatever she has at her own house, like [a] basket,” Yang said.

The video lessons are being centrally recorded by the Shanghai Education Commission for the city’s students. At the same time, each school has its own requirements.

This has made the initial technical set up confusing for Yang.

“For the municipal class, [I needed to download one app]; for school-specific materials, [it was] another app,” Yang said “All [of them] had different log-in names.”

It has been seven weeks since Shanghai students started online classes. Yang said online schooling has become a smoother process for her family, which is just as well.

There is no exact date on when her daughter can return to school.