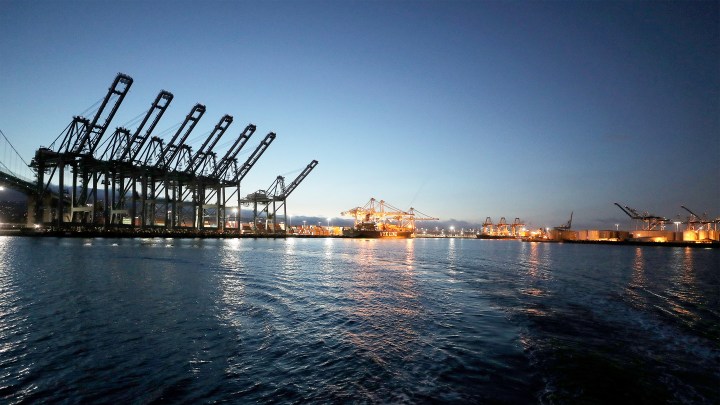 For the businesses still trying to make products in this new world — whether it’s a lifesaving treatment or a bag you use for carry out — just functioning as normal is a huge challenge.

Take MilliporeSigma, a life sciences company that makes materials that can be used to make antibodies and vaccines that might one day help treat COVID-19, among other things; things like a type of filter for bioreactors.

“This filter’s membrane was developed in Massachusetts, it is now cast in Cork, Ireland. The polymers that are used are sourced from a variety of different countries, including China and India. The solvents come from Darmstadt, Germany,” said chief exective Udit Batra.

The frames for the filters are made in Mexico. All of that to make one product… that is used to make. … another product

When one small supplier in France was about to shut down due to a lockdown, Batra’s company had to step in to get permission for them to keep working. When a plane loaded with components couldn’t take off in India, they sought help from the Swiss ambassador and the Indian government.

“Supply chains across industries are going through a lot of disruption,” said Susan Lund, a leader of the McKinsey Global Institute.

What once was shipped by plane may now have to go by boat or rail, and breakdowns way up a supply chain are catching some companies by surprise.

That means the shutdowns that began months ago in China, where so many items come from, are only just now starting to show up in some supply chains. For some industries, this is the worst possible moment for supply chains to break.

“Starting in the middle of March, we saw huge spikes in sales as consumers were looking for ways to protect themselves and their families from the virus,” said Kelly Vlahakis-Hanks, head of cleaning supply company Earth Friendly Products. To lower its carbon footprint, her company long ago decided to produce locally.

“The way our business is set up right now, we have four manufacturing facilities around the nation,” she said, adding that it’s that very structure that saved the business; when one part of the country shut down, others could take over.

As the pandemic calls into question traditional supply strategies, this is a strategy more manufacturers are following, according to Jeff Pratt, supply chain leader at BDO.

“It’s causing a lot of supply chain leaders to really look at the footprint of their supply chains,” Pratt said. “It’s been an easy decision for some time to say: ‘I’m gonna be supplied from a low-cost country, low-cost environment,’ and that’s been a predictable decision up until now. And we’ve seen … many clients being really dependent on certain geographies and suppliers, and I think both the tariffs and pandemic and downturn have really raised the focus on what the footprint of that extended supply chain should be, and whether there should be alternatives baked in.”

Companies are thinking about finding suppliers who are close to their market, geographically diverse, and who can serve as good backups. Simply being the cheapest won’t cut it.