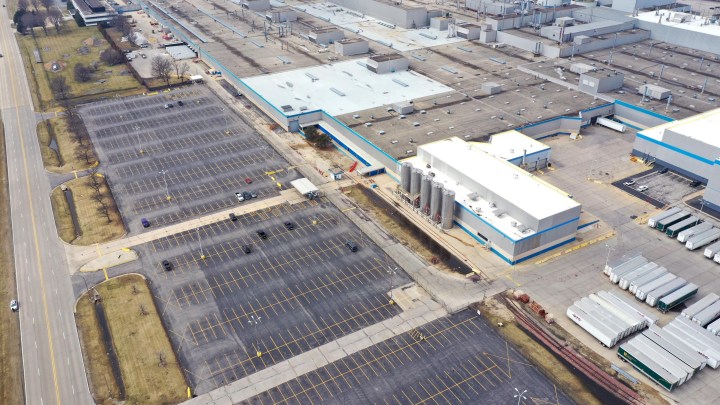 Observers have an early look at how bad things are in the manufacturing sector. The April 1 publication of the Institute for Supply Management’s monthly purchasing managers’ index shows new orders received by factories fell to the lowest level since the end of the Great Recession. The manufacturing index fell from 50.1% to 49.1%.

In at least 30 states, shelter-in-place orders have forced factory shutdowns.

“About a week ago our factory in Michigan had to shut down, because of a local state order,” Jim Keane, CEO of Michigan-based office manufacturing giant Steelcase, said. “We continue to make product in Alabama. Our California plants had to shut down. Our Texas plants are also facing local restrictions.”

In the last couple weeks, regional manufacturing indices in Texas, New York and Philadelphia have plummeted. But the national picture is still emerging.

“We have no point of reference,” Rubeela Farooqi, chief U.S. economist at High Frequency Economics, said. “I’m forecasting everything, but I have much less confidence in all the estimates I’m putting out there. You know, we haven’t been in a situation like this.”

She says it could take three to six months of data to understand the pain in the factory economy, and when it might bounce back. Still, manufacturing may be faring better than a service sector now flat on its back.

“Industrial companies are generally not on the front lines of the localized disruptions,” said Karen Harris, macro trends managing director at Bain and Co., “compared to high-touch consumer businesses like hotels and retail.”

To her, the silver lining is how American factories are showing flexibility in this crisis. Several U.S. automakers, for instance, have begun the process to produce ventilators for hospitals.

And at Steelcase, business is already changing, according to Keane. Customers are requesting office equipment with more safety and distance barriers, along with video chat-friendly design.

Keane compared the coming change to the post-9/11 world, saying life will be different and factories will adjust.

That is, factories that survive the shakeout.