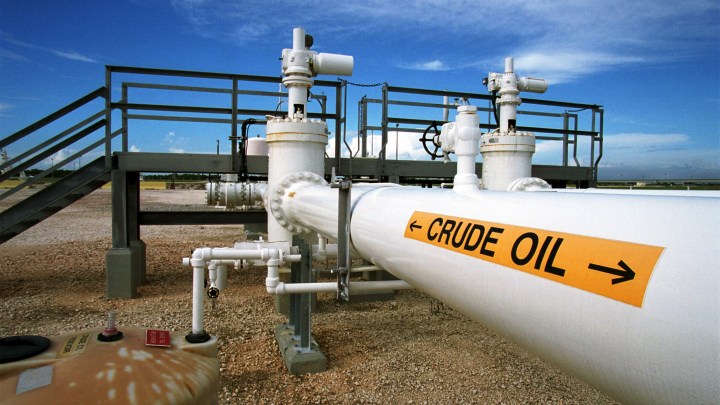 COPY
The price to store oil is soaring. Above, a pipeline carries oil at the Federal Strategic Petroleum Reserve facility known as Big Hill near Beaumont, Texas. Joe Raedle/Newsmakers
COVID-19

The price to store oil is soaring. Above, a pipeline carries oil at the Federal Strategic Petroleum Reserve facility known as Big Hill near Beaumont, Texas. Joe Raedle/Newsmakers
Listen Now

The price of oil is way down right now, at roughly $21 a barrel. With air travel also way down and hardly anyone on the road these days, the demand for oil just isn’t there. But all that oil out there has gotta go somewhere, right? The storage of commodities is the real hot commodity right now.

The United States has the infrastructure to store unused oil, whether it’s in old salt caverns along the Gulf Coast or oil tankers that float offshore. But Jim Burkhard, vice president and head of crude oil research and energy and mobility research at IHS Markit, said with demand plummeting, that storage is reaching full capacity.

“The infrastructure is not built to handle a 20% to 25% overnight collapse in oil demand,” Burkhard said.

There are reasons why a producer would keep pumping oil now. Burkhard said shutting down a drilling rig can damage a reservoir.

Tom Seng, director of the School of Energy Economics, Policy and Commerce at the University of Tulsa, said smaller producers might have to keep pumping oil, despite the low prices they’re getting for it.

“Even though on the books it’s going to be a loss, they’ve got to have some cash flow to maintain operations,” Seng said.

And that’s just in the United States. Matt Smith, director of commodity research at ClipperData, which tracks flows of crude oil around the world, said the oil production war going on overseas will dump even more crude onto the market.

“We’re going to see a lot of barrels coming to market in the next few weeks, not only from Saudi Arabia, but likely from Russia [and the] United Arab Emirates,” Smith said. He added that the price of storage is shooting up.

Oil tanker rates have reportedly doubled from last week. Burkhard said if storage capacity runs out, U.S. oil production might have to start shutting down.

“At current production levels, the oil supply surplus will exceed the ability to store it,” Burkhard said. “Something’s got to give.”

He estimates that by next year, U.S. production could drop by nearly a third.