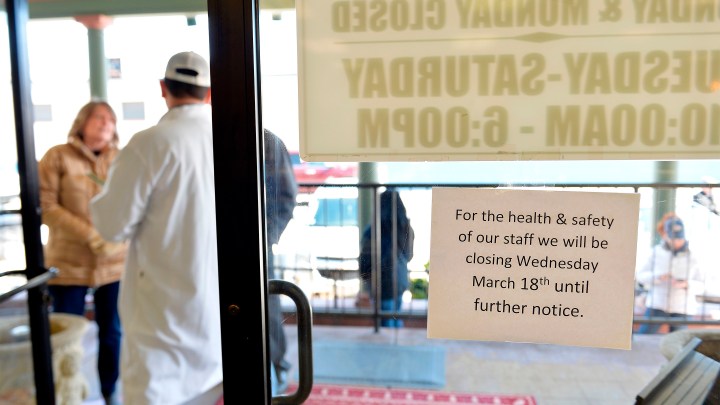 COPY
Many small businesses are struggling during the COVID-19 slowdown. Joseph Prezioso/AFP via Getty Images
COVID-19

Many small businesses are struggling during the COVID-19 slowdown. Joseph Prezioso/AFP via Getty Images
Listen Now

Congress passed the $2 trillion COVID-19 aid bill Friday afternoon, which means that there is some help coming from the federal government for small businesses.

But for the last couple of weeks, those small businesses have been scrambling to make payroll, sort out which staff they can keep on — and which they can’t — and figure out some way to keep money coming in.

While Washington has been working out this deal, a lot of small businesses have been hanging on by a thread. Like Kate Fryer’s beads, wire and accessories shop A Bead Just So.

“I’m trying to get my inventory loaded up on my website, which I’ve never done before. It’s a brand new, really intense process,” she said.

Here in Washington D.C., some restaurants are frantically shifting from bar and dining room service to carry-out and deliveries. Mark Kirwan, who owns two restaurants in the area, has been doing deliveries, but not alone. His mascot, Jack — a playful, Italian mastiff puppy who’s bigger than most full-grown dogs — has been going along.

“At times like this, when you’re in the doldrums, I just look at him and his face and it just brings a bit of warmth into you,” Kirwan said. Warmth he’s needed after laying off his staff. He figures he can only hang on for another month or so.

Other small businesses are pulling in even less. Shobha Tummala, who owns a chain of hair removal salons in Maryland, D.C., and New York, said she’s making a little off online sales and gift cards, but it doesn’t really make a dent with rent almost due.

“We would have to sell $100,000 worth of gift cards for it to make a real significant difference,” Tummala said. “That’s not going to happen.”

Tummala laid off her almost 100 employees last week in a series of video conference calls.

“I wanted to see everybody. I wanted everybody to see me,” she said. “They rely on me to take care of them and so it can get emotional.”

The new aid package could help people like Tummala cover rent and expenses. But without customers, even that will only go so far to keep companies in business.