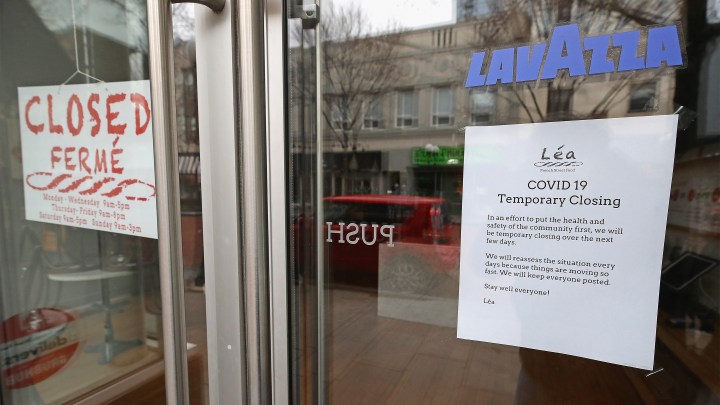 COPY
A closed restaurant after a "shelter in place" order was given to residents to slow the spread of COVID-19 on March 20 in Oak Park, Illinois. Jonathan Daniel/Getty Images
COVID-19

A closed restaurant after a "shelter in place" order was given to residents to slow the spread of COVID-19 on March 20 in Oak Park, Illinois. Jonathan Daniel/Getty Images
Listen Now

The House is set to vote today on the $2 trillion stimulus bill to address the economic fallout of the COVID-19 pandemic. It includes expanded unemployment insurance that could surpass some low-wage workers’ take-home pay. The measure passed unanimously in the Senate, despite four Republicans’ initial objections to the unemployment benefit provision, which they said could incentivize unemployment.

Usually, jobless benefits replace just a portion of a worker’s lost wages, but the debate over how that changes people’s behavior flares up pretty much every time government benefits are extended or made more generous, according to Northwestern University economist Matthew Notowidigdo.

“The concern is that it’s going to lead people to stay unemployed longer,” he said.

It’s a basic principle of economics: The more you subsidize a behavior, the more people do it. And Notowidigdo said there’s pretty solid evidence from countries all over the world that does happen. The longer benefits are available, the longer, on average, people will take to find a job.

“That’s a consistent finding that’s gone back decades,” he said.

That could have some bad effects, according to Angela Rachidi, a scholar at the conservative American Enterprise Institute.

But she acknowledges this is an unusual situation. And Luke Shaefer, a professor of social work and public policy at the University of Michigan, said for every person who might use these benefits when they don’t need them, there are others who truly do need them.

That has big benefits for the economy and society as a whole, Shaefer said. As for the current situation, Notowidigdo said giving people an incentive not to work might be a good thing.

“That could benefit us all in terms of reducing the spread of this virus,” he said, adding that because so many businesses are shut down due to COVID-19, there may not be a lot of jobs available right now anyway.