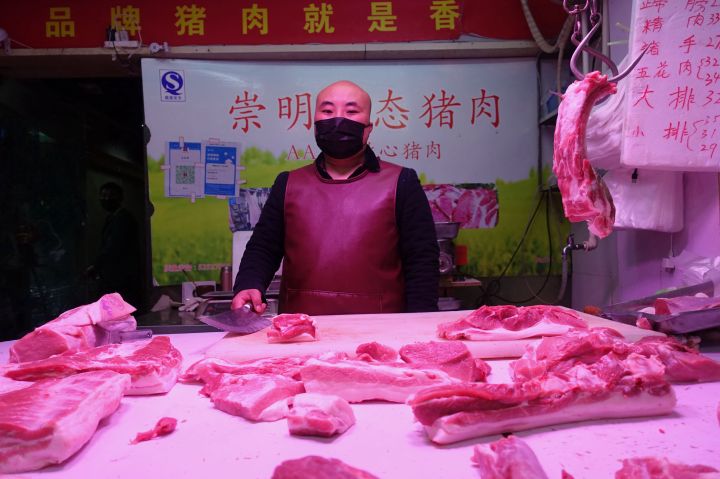 COPY
Ma Qiang mainly supplies to restaurants but a lot of them are struggling after weeks of closure. Charles Zhang/Marketplace

Ma Qiang mainly supplies to restaurants but a lot of them are struggling after weeks of closure. Charles Zhang/Marketplace
Listen Now

Ma Qiang recently chopped pork ribs at the back of a tiny vegetable shop in an affluent neighborhood of Shanghai’s Jingan district. He has been running a pork stand for a decade — most of his customers are regulars.

“You’re a good person. That is why I respect you,” he said to an elderly female customer, who laughed. Ma is happy to be back in business, which took him more than five weeks.

According to Chinese officials, central Hubei province, the epicenter of the COVID-19 virus outbreak, is still getting its economy back on track. About half of big companies remain shut down. Outside of Hubei, 90% of large firms are back at work. However, small and medium-sized companies are still struggling: only 60% are open.

Despite China’s national health commission declaring that the country passed the peak of the epidemic earlier this month, business has not returned to normal. Part of the struggle has been varying travel restrictions between provinces and municipalities during the virus outbreak.

In Ma’s case, he was trapped in his hometown in central Anhui province after visiting for the Lunar New Year holiday in January. When he was finally allowed to leave, Ma still couldn’t open shop. “When I came back [to Shanghai] in February, I had to self-quarantine for 14 days,” he said through his face mask, which is required on all business premises.

Ma resumed operations earlier this month. Business has been picking up despite pork prices doubling in the past year from the African Swine Fever, which decimated China’s pig population. “People are still buying pork, but they might buy smaller amounts,” Ma said.

Some customers, thought, haven’t changed their consumption habits. “I buy as much pork as I want to eat, even if it’s expensive,” a longtime customer of Ma’s told Marketplace. He gave his surname as Gao and dashed off to prepare lunch.

Ma said 70% of his revenue comes from supplying restaurants. Those clients ordered tens of thousands of dollars’ worth of pork from him to serve during the Lunar New year holiday. The restaurants were going to pay Ma once the holiday was over.

“They were fully booked but then the COVID-19 virus spread. The government forced restaurants to close,” Ma said. “If the outbreak happened 10 days later, they could have earned enough to survive for the year.”

He said most of his restaurant clients are looking for cash injection, while one has gone bankrupt. Those clients still owe Ma 250,000 yuan, or about $35,200, in unpaid invoices. “The restaurants say I can take whatever meat and seafood are left in their freezers and sell them to my customers,” Ma said.

That will help him recover some of his costs, but not all. He expects to lose at least 100,000 yuan, or $14,000, which he said isn’t enough to put him out of business or cut his part-time worker. “However, it is not a small sum. It’s hard-earned money. Of course, it hurts,” Ma said.

He plans on looking for other restaurants to work with. More dining places are re-opening in Shanghai, but they are not full because of social distancing measures imposed by local authorities. And because of fear.

One of Ma’s regular customers, Wu Lingmei, used to eat out a lot with her family before the virus outbreak. “I don’t go to restaurants anymore. Even if the government says it is safe, I won’t go,” Wu said.

Since she only cooks at home, she insists on buying pork from Ma because she said he has good quality meat and his prices are lower than others’ nearby.

“Customers like [her] keep me in business,” Ma said.