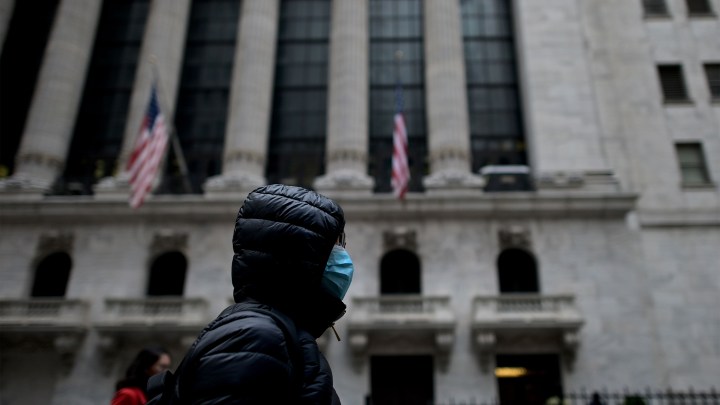 Financial markets are falling around the world from escalating fears of COVID-19, the coronavirus disease — both the fact of its increasingly wide and rapid spread in Asia, Europe and the Middle East and the widening economic impact on global supply chains, travel, and consumption.

We haven’t seen much impact yet on U.S. consumer sentiment, though we’ll get new numbers from the Conference Board on consumer confidence Tuesday.

So far, when research outfits like the Conference Board and University of Michigan have asked consumers how they’re feeling about the economy, COVID-19 hasn’t seemed to be worrying them enough to dampen their optimism about the future or crimp their willingness to spend (though the Dow Jones Industrial Average’s 1,000-point plunge Monday could change that outlook).

At a transit station not far from downtown Portland, Oregon, Lincoln Barron Holmes was waiting for his bus. He works as a costumer for TV shows. I asked if he’s thinking about the outbreak.

“Honestly, I am not worried about it in like a deep, visceral way,” he said, adding that the epidemic is on his mind but doesn’t impact what he does with his time or money.

“It doesn’t touch my day-to-day life that much,” Barron Holmes said. “I’m not planning international travel.”

So far, U.S. consumers are hearing about global supply chain disruptions and now the stock market.

“The psychological impact if it gets close to us is likely to be more threatening, where you are afraid to come close to people, to go to the movie theater or a stadium,” Statman said.

And Barron Holmes was thinking about it at a Portland Trail Blazers basketball game last night.

“It crossed my mind while I was there, just because I was in a big group of people,” he said.

Steve Schroeder is starting to worry about his personal economy. He’s visiting from Bloomington, Indiana, where he runs a vegan ice cream business.

“My biggest product is coconut milk, unfortunately, and a lot of the places where coconut milk comes from — I really hope we can figure this out and get a vaccine soon,” Schroeder said. “There’s too many deaths, and it’s scary.”

Schroeder’s already concerned about his ice cream sales for summer.