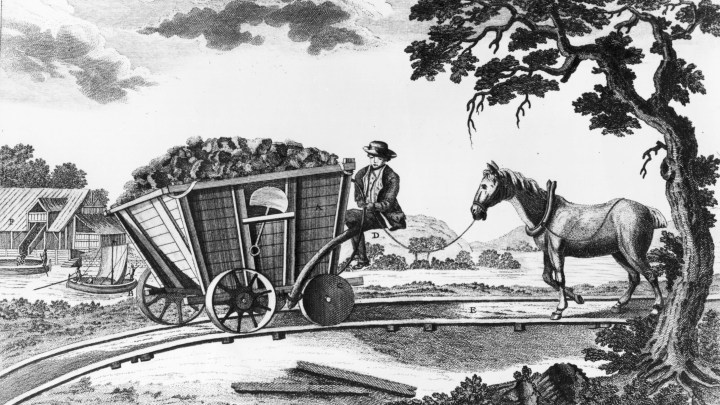 COPY
A Newcastle coal wagon of 1773 on a railway line from "A Picture History of Railways" by C. Hamilton Ellis. Hulton Archive/Getty Images
Econ Extra Credit with David Brancaccio

A Newcastle coal wagon of 1773 on a railway line from "A Picture History of Railways" by C. Hamilton Ellis. Hulton Archive/Getty Images
Listen Now

This interview is part of our “Econ Extra Credit” project, where we read an introductory economics textbook provided by the nonprofit Core Econ together with our listeners.

For most of human history, the standard of living remained flat, not changing much from year to year, even century to century. Until the Industrial Revolution, that is, when the world population and standards of living skyrocketed.

Since then, there’s been a steady increase in gross domestic product, technological innovation and international trade. The visual representation of this phenomenon is called the hockey stick graph: a flat handle with a sudden upward arc. It was a product of a then-new economic system, capitalism.

But, as professor Homa Zarghamee of Barnard College told “Marketplace Morning Report” host David Brancaccio, while capitalism might have played a role in the sharp increase in living standards, (as the econ adage goes) correlation is not causation.

“Capitalism can be a factor that helps this exponential growth take place, but is it the only factor? Would it have happened in the absence of other institutions that were in place beforehand? We don’t know. And in economics, this question of causal inference is a very important one,” Zarghamee said.

There were other elements besides capitalism that could have catalyzed the sudden expansion, Zarghamee added. The other C’s.

There is the idea of culture, specifically the Enlightenment period, which preceded capitalism, during which there was a focus on scientific method, reason and liberty.

The third C is colonial expansion.

“Colonial expansion dramatically changes the relative prices of energy —coal — and labor and also provides these huge new markets and sets of resources to draw from,” Zarghamee said.

She stressed that in order to tout causation in economics, social scientists must conduct experiments that allow them to have a control group.

“If I want to look at the effect of studying on grades, I can look across people and see that people who study more seem to have higher grades,” said Zarghamee. “But then I’d like to keep constant certain factors about these people, so I’m not comparing people with different IQs, because it might be that a higher IQ makes you do better on tests and makes you enjoy studying more. But it’s not necessarily the studying that’s improving the grades.”