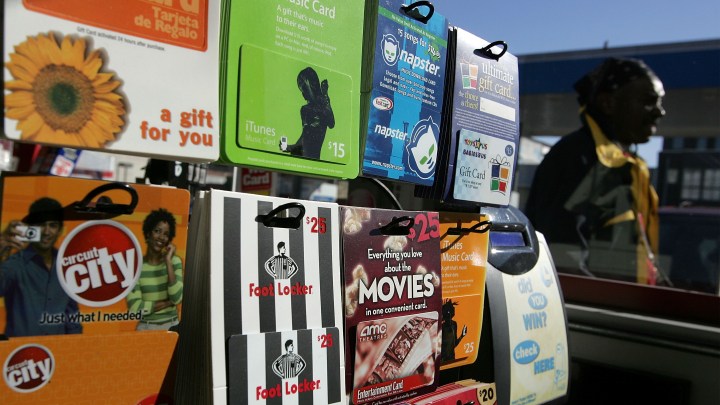 Vast sums of money are tied up in unused gift cards and digital wallets. Paypal had customer accounts totaling $22.5 billion as of a few months ago, and together Walmart and Starbucks held about $3.5 billion in deferred gift card revenue, said Lael Brainard, a member of the Federal Reserve Board, in a recent speech.

That’s thanks to people like Los Angeles attorney Adam Byrne, who has collected so many gift cards he can’t even keep track of them. $25 at Kohl’s, another $25 for Chipotle, several cards each for Target and Starbucks. There are way too many for him to fit in his wallet — they’re collecting dust in a drawer.

“Unfortunately that decreases the likelihood of me using them because I don’t see them often,” said Byrne.

Byrne could use the cards years from now … or never. And that can make for some tricky accounting, according to retail analyst Sucharita Kodali with Forrester.

“It’s held as a liability on the balance sheet of books. It’s similar to airline miles,” she said.

Being on the hook for billions of dollars in unredeemed gift cards sounds bad for retailers, but Kodali said what matters is not so much the amount, but how long the gift cards have been out there in the world.

Most of those cards are redeemed within eight weeks, according to marketing professor Dan Horne at Providence College.

“The odds of a card being used after three or four years approaches zero,” he said.

And, he said, retailers are allowed to start counting a percentage of unredeemed cards as income after it becomes clear customers are unlikely to use them. In 2018, Starbucks claimed $155 million worth of this so-called “breakage” revenue.

“It’s lost value to consumers and it’s a small benefit to retailers,” Horne said — except in states like Delaware and New York, which eventually count unused gift cards as unclaimed property and seize those funds to plug budget holes.