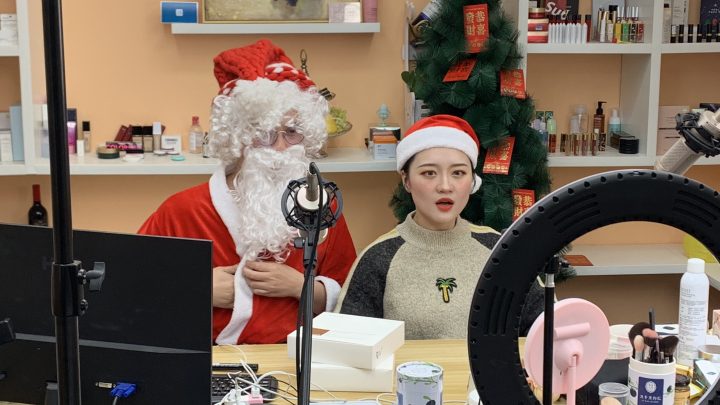 At 6 p.m. on an evening in late December, Eva Wang and her co-host Sam Tian began broadcasting on Alibaba’s e-commerce platform Taobao.

Eva fixed her hair in front of the mirror and looked at her cellphone. Sam stepped in and out of the camera frame, also staring at his cell.

Twenty-five seconds passed before they both sat behind a white desk and looked up at the camera.

It’s all part of Sam and Eva’s Taobao livestream, where they mainly sell beauty products, such as face creams, sunscreen and makeup.

It’s among the more than 60,000 shows running daily that are hosted by influencers or Taobao shop owners. Last spring, Taobao pulled in 9 million viewers a day, according to the company.

While Eva is the beauty expert, Sam said he plays a supportive role and injects a bit of fun into the show. Ten minutes into the broadcast, Sam launched into an impromptu karaoke session.

The song began with a piano solo. Then Sam addressed a viewer directly.

“Hey, sister Xian, have you decided whether to put your child into piano lessons?” he asked.

Sam said he treats viewers like family, even referring to their channel subscribers as “baobao,” or darlings. But he and Eva have to offer viewers good deals as well.

As Eva was helping a Taobao shop promote a $12 Japanese mouthwash during the December show, Sam volunteered to ask the shop owner for a discount. He left the room and returned minutes later looking disappointed.

“The owner said she will offer our viewers $3 off on the first five bottles,” he said, deflated.

“Five bottles? What can we do with that?” asked Eva.

She wants an attention-grabbing sale to push people to buy so she can earn commissions. But it’s hard for Sam and Eva to negotiate big discounts from Taobao shop vendors with only 1,600 channel subscribers.

Then there’s Viya, one of the top two earners on Taobao Live.

Alibaba estimates that in 2018, Viya earned 30 million yuan ($4.4 million) in sales commission from Taobao shops, with 2.3 million subscribers. She now has more than 14 million followers.

Even Kim Kardashian partnered with her to sell her latest perfume. Within minutes, they’d sold 15,000 bottles.

The success of Viya and other top Taobao influencers is what inspired Sam to join the industry.

He quit his advertising job in Beijing, where he earned a base salary of 12,500 yuan ($1,800) a month. He used to get additional commissions, but Sam said that stopped in late 2018 as the Chinese economy slowed.

“The [base salary] wasn’t enough to pay off my credit card bills and bank loan,” Sam said.

He even convinced Eva to quit her job teaching drama and speech to children in order to start a Taobao livestream with him.

Sam and Eva moved from Beijing to join a talent agency in Hangzhou called Jitao, which offered them training and products to sell from Taobao shops and brands.

Sam told “Marketplace” they have final say on what products to promote, based on their viewers’ interests.

He said most of the people who buy from their livestream channel come from provincial cities where Taobao Live is also entertainment. Towards the end of the show, Sam removed his sock and pointed a bare foot at the camera.

“Look, look, look, look! I used to have a lot of dead skin falling off my foot after a shower, but look how smooth it is now!” Eva, who had stepped away from the camera to eat her dinner, vouched for him.

“This is true! I can confirm he had a lot of dead skin before,” she said. The cure was an $8 Japanese horse oil, which Sam guaranteed was real.

“Any product that is not genuine, we will be responsible,” he assured his viewers.

Sam and Eva act as a safety net for a lot of Chinese consumers who are wary of buying from Taobao. The e-commerce platform is flooded with counterfeit products, which is why it is on the U.S. Trade Representative blacklist.

At the end of a six-hour broadcast, they made only 20 sales. Sam said he was not worried — they had only started their Taobao livestream channel two months prior. The focus is still on acquiring more viewers.

That would be 30% more than their combined salaries from their previous jobs in ad sales and teaching.