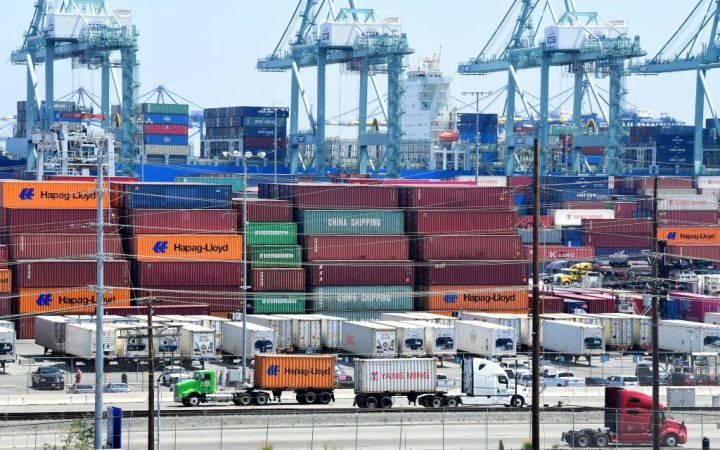 COPY
Container trucks arrive at the Port of Long Beach on August 23, 2019 in Long Beach, California. - President Donald Trump hit back at China on August 23, 2019, in their mounting trade war, raising existing and planned tariffs in retaliation for Beijing's announcement earlier in the day of new duties on American goods. FREDERIC J. BROWN/AFP/Getty Images

Container trucks arrive at the Port of Long Beach on August 23, 2019 in Long Beach, California. - President Donald Trump hit back at China on August 23, 2019, in their mounting trade war, raising existing and planned tariffs in retaliation for Beijing's announcement earlier in the day of new duties on American goods. FREDERIC J. BROWN/AFP/Getty Images
Listen Now

The U.S. trade war with China, the European Union and other trading partners has put nearly 1.5 million U.S. jobs at stake, according to a new study commissioned by the Port of Los Angeles.

One quarter of all the containers coming in and out of the country go through the ports of Los Angeles and Long Beach. But a new study conducted for the Port of Los Angeles finds shipping business in those ports fell 19% compared to the same month in 2018.

Jobs directly and indirectly connected to imports and exports via Southern California are threatened, the study finds.

“How many jobs are created in any one year? About 1.7 million,” said Mary Lovely, economist at Syracuse University and the Peterson Institute for International Economics. “Would you like to wipe out about two-thirds of the job gains of the last year? I don’t think that’s something that one would want to undertake lightly.”

The trade war debate in the United States often focuses on American exports. But the Port of Los Angeles study finds far more jobs are threatened by tariffs on imports, including foreign-made auto parts bound for American car assembly plants.

“Companies and businesses see an increase in their input costs,” said Gregory Daco, economist at Oxford Economics, “and may take actions to reduce employment.”

In the California economy, the sectors most impacted by slowing imports are in agriculture and food services.

“When you look at calamari we import from China for restaurants to serve as an appetizer on your menu,” said Eugene Seroka, executive director of the Port of Los Angeles, “folks with particular skill around perishable commodities will sort, package and distribute to our restaurants and grocery stores. Those are real jobs.”

The Trump administration plans more tariffs next month, on cellphones, laptops and other items from China. That is, unless a trade deal between the U.S. and China is struck.