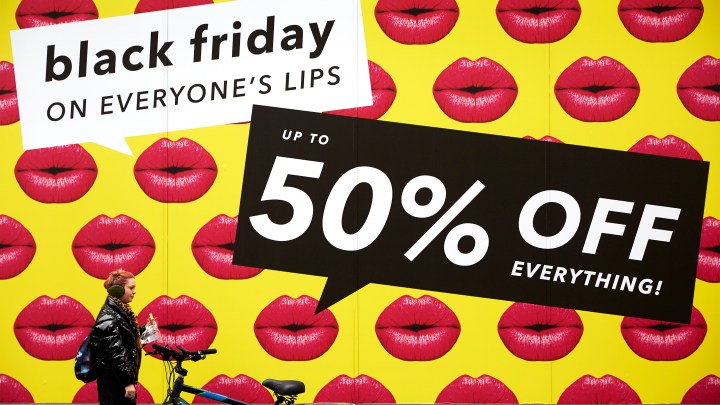 COPY
Holiday merchandising is more strategic than you might think. Alex McBride/Getty Images
The Season

With three weeks still to go before Black Friday, retailers like Best Buy, Target and Walmart are already announcing deals.

And that got us wondering: How do retailers decide which products to put on their lists? As it happens, this is a tough question to answer.

“Holiday merchandising is a highly strategic activity,” said Joel Bines, managing director and co-head of the retail practice at Alix Partners. “So what’s promoted and at what price and so forth are highly guarded secrets.”

We know retailers tend to go for two things on their Black Friday lists. There are the classics, the items that you expect to see every year and that many people actually wait until Black Friday to buy: cameras, TVs, laptops, cell phones.

And then there are the trendy products — whatever retailers think is going to be hot this year, based both on their own data and on what they see people talking about on social media.

Target’s Black Friday deals so far include the Squishmallow Unicorn, a 22” stuffed critter, for $25. For $18, you can get the Baby Shark Dancing Doll, which will provide endless fun … until you chuck it out a window.

“Even if you don’t have kids, you have probably heard the song and got it stuck in your head,” said Casey Runyan, managing editor at the website Brad’s Deals. “Retailers want to have those things on their list, that eye-popping thing, that [will make people think] ‘Oh, I’ve seen that before.'”

These products are not necessarily supposed to make money. Retailers are willing to take a loss on them because they get people into the store and onto the website, said Jane Boyd Thomas, a marketing professor at Winthrop University in South Carolina.

“They’ll come in and they’ll buy the hugely discounted television, for example, but while they’re there, they’re going to buy some other items. as well,” she said.

Ideally, those will be items with a higher profit margin.