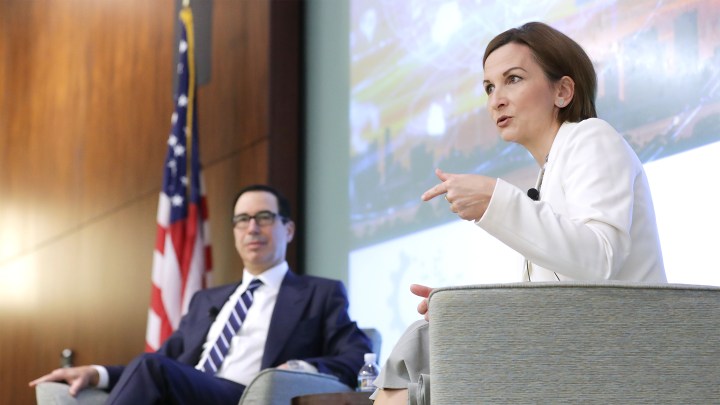 Molly Wood spoke with Jelena McWilliams, chairman of the Federal Deposit Insurance Corp., which is in charge of banking insurance in the United States. Her job has changed with the wave of tech companies getting into banking and financial services. The following is an edited transcript of their conversation.

Molly Wood: How do you think over time the actual fundamental role of the bank might change? You see a lot of companies saying, you know, “We’re payments processors.” Do you think banks will still be processing payments in the future? Will they make all their money on consumer loans? How do you see, as there’s so much competition, the role starting to stratify?

Wood: I want that machine.

McWilliams: Well, we have to think about the FDIC sticker on that machine. But you know, the question for us on the regulatory side is are we going to be standing in the way of that innovation, or are we going to be open minded enough while making sure that the banks are safe and sound and there’s adequate protection?

Wood: Can we talk about Libra for a second?

McWilliams: We can’t talk about a specific currency because of our regulatory framework, but I’m happy to talk about generally crypto assets and cryptocurrencies.

Wood: Where do you see this going? How long is it before a central bank or a government issues a cryptocurrency?

McWilliams: I know there are talks underway as to what the role of the regulatory bodies in this space is. As a regulator, you want to make sure that innovation can be fostered, but at the same time, there are certain developments, such as the crypto assets, that have the possibility to undermine the whole central banking system of a country. One of the things that needs to be decided, you know, is it an asset or is it a security? Is it a currency? If it’s truly a currency, then we need to start thinking about the implications of that, including what does that mean for the deposit insurance? So I’m open minded while at the same time making sure that the regulatory agencies are working together so that we don’t have a fragmented approach to how we regulate and look at this development.

Wood: Are there, do you think, other innovations that can answer some of the needs that, you know, Libra points out, which is a global seamless payment system, the ability to serve the unbanked in an easy and digital way?

McWilliams: Every time we see a disruptor, I always ask why. Why were they able to step in and do this? What was lacking in the marketplace that, you know, somebody planted the seed and there was fertile ground and the seed grew into this product? And so as I looked at the cryptocurrencies and crypto assets, the issue of real-time payments comes into place. One of the things that I want to make sure that we don’t do is either bless something we’re not sure about and we don’t understand its implications for the consumers in the marketplace, but also we don’t want to discourage innovation. I feel like I’m on a seesaw every day, and I’m trying to figure out how to create that balance where we do enough to encourage innovation, but we don’t do something that would cause the system to irreparably go into disarray.

Wood: It must be difficult. You see these companies kind of plowing ahead, you see people saying the U.S. is so far behind on blockchain. I would imagine that almost every regulatory body feels this way, that you don’t want to get left behind, but you don’t want to do it wrong. And the stakes when it comes to global monetary policy are way higher, right? How stressful is this for you?

McWilliams: Well, it’s stressful. Doing laundry is stressful as well in my household.

Wood: So laundry is as stressful as Libra. I can write that down.

McWilliams: Here’s how I look at this. To the extent that these currencies and crypto assets and blockchain are developing to help society be better, we need to take the big picture into the equation here, right? The central banks of the world have a very easy job of saying no immediately and stopping all of this in their tracks. The fact that that has not happened should tell you that it’s a positive development, I think, because the regulators are at least taking the time to understand the implications while analyzing the impact on the system. And so it’s stressful because you don’t want to make a mistake. And so we need to change at the regulatory agencies. Because if you really think about it, we’re dealing with a 21st century technology with a workforce from generally the 20th century, based in some cases on some regulatory agencies and the laws and organic statutes that were given to us by Congress in the 19th century.