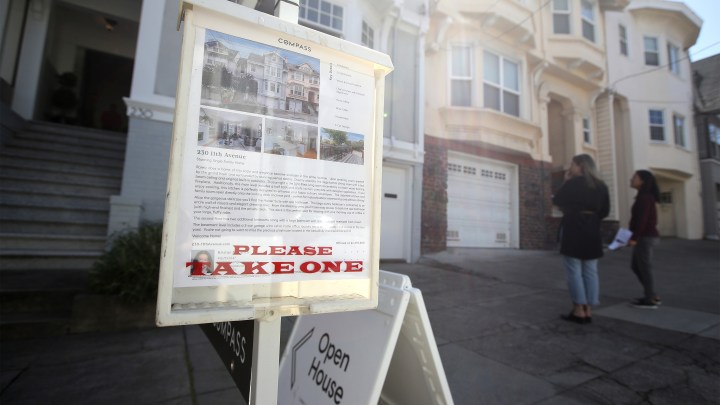 COPY
People look at a San Francisco home for sale in April. The Bay Area market that has become increasingly expensive as tech workers from Silicon Valley push up prices. Justin Sullivan/Getty Images

Apple is the latest Silicon Valley company to pledge big money for affordable housing in the Bay Area.

It’s committing $2.5 billion on top of $1 billion each pledged earlier by Facebook and Google’s parent, Alphabet.

Silicon Valley’s housing costs are among the highest in the nation. An average home there costs well over $1 million, and the average apartment rent is nearly $3,000 a month.

Helping employees with housing is not a new idea, said Robert Silverman, a professor of urban and regional planning at the University at Buffalo. In the past, companies have built houses for factory workers.

But “even in the more contemporary period, some things like providing for down payment assistance and low-interest loans have been pursued by universities, health care institutions,” he said.

Apple’s plans aren’t focused only on its staff. It’s putting $1 billion into an affordable housing investment fund for California and the same amount into a mortgage assistance fund for first-time buyers, which the company said will help teachers, veterans and service workers.

“The giving back here should be seen as necessary and required,” said Sunia Zaterman of the Council of Large Public Housing Authorities, “because these corporations are benefiting from the workforce, from the transportation systems, health systems, that are already in their communities.”

But “I think there are just limits to what we can expect it to do,” she said. “Throwing money at a problem that isn’t just about the lack of money doesn’t help.”

She points out other problems, like a lack of land and a permitting and building process that she said is too complicated and expensive.

And even the billions that have been committed by tech firms won’t make much of a dent in the nation’s affordable housing problem, Zaterman from the Council of Large Public Housing Authorities said.

“My candid assessment would be a day late and a dollar short,” she said. “In terms of order of magnitude, I would say it’s an important starting point.”

She said public housing in the United States needs an injection of $50 billion to $70 billion.

“It’s great to see companies like Apple making investments like this because it’s so desperately needed,” said Andrew Aurand of the National Low Income Housing Coalition. “In the end what we need, though, are federal resources.”

He said not every part of the country has rich companies that can make investments in housing.