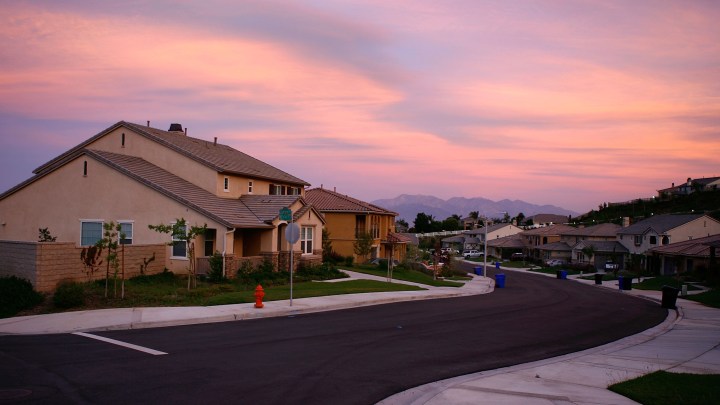 COPY
In California, some 37% of adults age 18 to 34 are living with at least one parent. Above, a suburban neighborhood in Highland, California. David McNew/Getty Images
Adventures in Housing

In California, some 37% of adults age 18 to 34 are living with at least one parent. Above, a suburban neighborhood in Highland, California. David McNew/Getty Images
Listen Now

Patsy’s Irish Pub in Mission Viejo is like a lot of other Californian bars in 2019: off-key karaoke, a crowd of people vaping outside … and plenty of people in their 20s and 30s who still live with their parents.

“I’m here right now getting drunk with my mom,” said Jacob Ostheimer, 24, who lives with his mother, stepfather and his wife. “The whole family’s here.”

Ostheimer is not alone. According to an analysis of U.S. Census Bureau data, roughly 37% of Californians between 18 and 34 live with their parents.

“We had an apartment here for, like, two years,” said Ostheimer. “But I was spending, like, $30,000 a year in rent, and I could have had that in my savings right now.”

In this expensive part of Orange County, 55% of 18 to 34-year olds live with a parent, one of the highest rates in the state.

Ostheimer is saving up to buy a house of his own. According to Zillow, Mission Viejo’s median home value is more than $700,000 dollars.

It’s not just wealthy areas like Mission Viejo. Hardie says multi-generational housing is also very common among lower-income families who pool together resources to afford the rising cost of living.

“They often also pay some sort of rent towards their parents,” said Hardie. “They also get groceries or pay for household bills.”

That doesn’t necessarily mean everyone gets along, though, said Megan Negendank, a couples therapist based in Sacramento.

“They’re in that maybe teenage bedroom that one of them grew up in,” said Negendank. “And they can feel uncomfortable, so communication goes downhill.”

As Sacramento home prices have jumped in recent years, Negendank has seen an uptick in young adult couples dealing with the stress of living with baby boomer parents. Romance can be tough to maintain when mom and dad are just down the hall.

“What I have seen a lot is that couples are just having a lot less sex when they’re living at home,” Negendank said.

But in an expensive state like California, moving out of your parents’ house does not mean your love life will improve.

Ian Baker works two jobs in Orange County, one at them at a bowling alley. He’s 29. He’s hasn’t gone on a single date since moving out of his mother’s place last year.

“Living with my parents, it actually wasn’t that hard to try and meet girls and whatnot,” said Baker. “Honestly, it became harder when I moved out. Just because of the fact that in order to move out I had to start working two jobs.”

The irony isn’t lost on Baker, who has two roommates and pays about $700 a month in rent. But he does have a step up on one of his roommates — the one who lives in the living room.