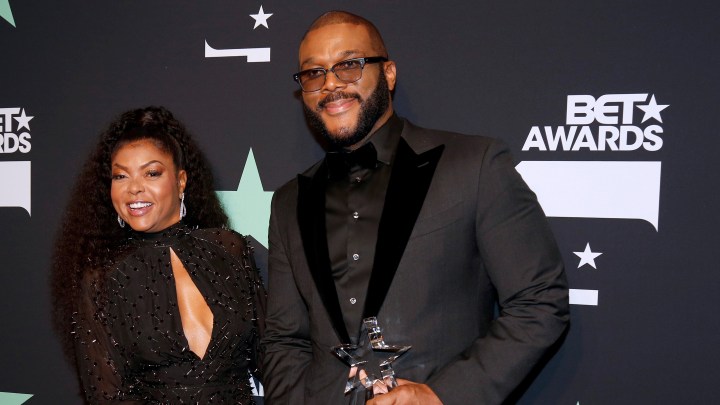 COPY
Filmmaker Tyler Perry’s entire catalogue will be available on BET Plus. Above, Perry and Taraji P. Henson at the 2019 BET Awards where Perry received the Ultimate Icon Award. Liliane Lathan/Getty Images for BET

Filmmaker Tyler Perry’s entire catalogue will be available on BET Plus. Above, Perry and Taraji P. Henson at the 2019 BET Awards where Perry received the Ultimate Icon Award. Liliane Lathan/Getty Images for BET
Listen Now

Black Entertainment Television is entering the increasingly crowded streaming market with a new service, BET+, costing $9.99 a month and including roughly a thousand hours of programming.

Hundreds of streaming services are already available, with more on the way.

Michael Smith, who studies how technology is changing the entertainment industry at Carnegie Mellon University, said that to access this market, entrants “either need something huge or something small.”

By huge, he means something like Disney+, with lots of famous franchises and blockbuster movies.

“And by small, I mean something targeted on a particular, well-identifiable niche,” he said — like black viewers.

Black people are underrepresented on existing streaming services, according to Darnell Hunt, who researches diversity in the entertainment industry at UCLA. He said BET+ will create “a platform that’s dedicated to African-American content, which will become a home for black talent.”

Hunt said that content — and the dollars that move to BET’s new streaming service — will also put pressure on “the Netflixs and the Hulus and the Amazons to continue green-lighting projects that are more diverse, that feature African-Americans, so they don’t lose that entire audience segment to BET.”

Like a lot of cable networks, BET is responding to the rise in cord-cutting.

“It’s really about extending us out to where consumers are moving and where consumers are, so that whether someone has a cable package or not, if they got rid of cable, that BET can be a part of the way they interact with content, watch video, consume stories,” said Devin Griffin, head of BET+.

“All of a sudden [they have] a unique identifier for you. And [they] can see exactly what type of content you’re interested in and target that content directly to you,” he said.

Smith calls it a feedback loop that’s good for the audience — and for the content creators.