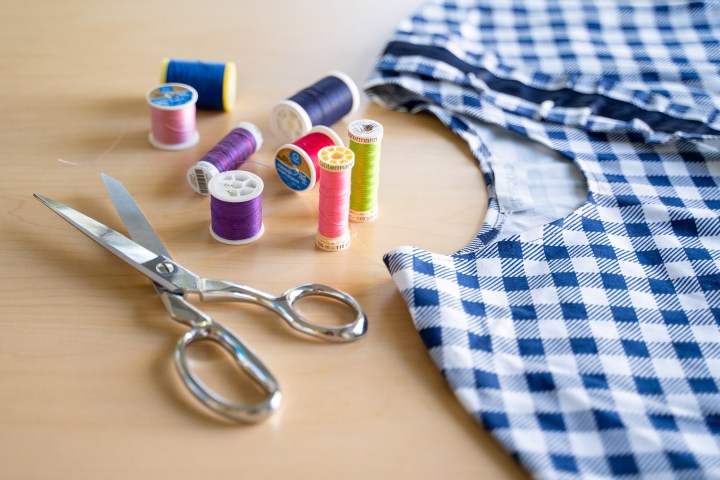 COPY
Sewing supplies next to a garment made with a SewSquad kit. Steven Byeon/Marketplace

Sewing supplies next to a garment made with a SewSquad kit. Steven Byeon/Marketplace
Listen Now

When Zoey Washington was a teenager, she loved fashion and regularly visited crafts stores and made her own clothes at home. But she’s never forgotten the ultimate hurdle to her creations: clothing patterns, the packets of large sheets of paper used to map out the pieces of a garment. They were complicated and didn’t reflect her sense of style.

Today, she’s come up with a solution to that problem. Along with a career as a writer, editor and stylist at major fashion magazines, her latest venture is SewSquad, a pattern company she created to disrupt the sewing industry.

SewSquad is a line of sewing kits that include a clothing pattern and instructions on the basics of sewing. It offers trendy styles inspired by the latest looks of the season. The major difference between Washington’s product and traditional patterns though is that SewSquad kits don’t require a sewing machine; the designs can be hand sewn with a needle and thread. The product is geared toward teens just learning to sew while discovering their personal styles.

Washington went through a SewSquad kit with “Marketplace” host Kai Ryssdal. The following is an edited transcript of their conversation.

Kai Ryssdal: So you’ve been a fashion journalist for a while, right? Like 10-something years.

Zoey Washington: I have. I’ve been in fashion since the year 2000. I started at Cosmopolitan magazine and then quickly went up the Hearst ladder and have been in fashion ever since. I made the transition to digital media about three years ago when I was the fashion director at Brit + Co.

Ryssdal: OK, so what is it that you saw, in your experience, that made you say, “You know what, there is a business model to be had in sewing patterns and people producing their own stuff”?

Washington: Like most people in fashion, I was really enamored with the idea of sewing at a young age. And when I was a teenager, I would often go to traditional craft stores, like Michael’s and Joann Fabrics, and I wouldn’t see much in the aisles that looked like me, that reflected me. And so I was sort of surprised as I’ve been going through fashion as an editor and writer and stylist, that that had not been addressed. And I really think that there’s just a such a dearth of product out there for teenagers and tweens. And what we want to do is really take that same sense of curiosity and excitement about style and translate it to something that’s a little bit more traditional. And vice versa, take the traditional idea of sewing and bring it into the digital era.

Ryssdal: Right, and give them something to wear when their Instagramming all the time, right, fundamentally?

Ryssdal: It’s a little crossover. All right, so you sent us some stuff. It’s a package with the branding up on top that says SewSquad, and it is a “create your own classic Tee. Super simple sewing project. No machine necessary.” I’m going to open it up, and I want to talk what we’re going through here.

Ryssdal: In real time. As I do this, you know, I remember my mom when I was a kid, she would get sewing patterns, like on that flimsy tissue material, and she’d lay it out on the dining room table and pin it to fabric, and she’s probably listening this, so she will certainly correct me in a phone call as soon as she hears it, but I don’t recall her ever wearing anything that she made. But that’s my mom, that’s not this. So here’s the fabric and the paper, convenient tape measure. And is the basic idea still the same? I mean, you supply the fabric, you lay it out, and you clip and sew. Is that the deal?

Washington: Yeah, the basic idea is still the same. It’s really just a new interpretation of it. It’s really difficult, if you’ve ever, you know, went past, just watching your mom make clothes —

Ryssdal: I don’t think I did.

Washington: You missed out! But you know, sometimes they can be intimidating. And the barrier to entry to trying out your own sewing seems really high because it’s very confusing. Sometimes they’re in French, and there’s multiple sizing. And there’s a lot of sort of inside-baseball speak when you open up a traditional sewing pattern, where it’s really confusing, and you just don’t know where to even begin. And so what we wanted to do is to really take a lot of the things that I learned as an editor, stylist and fashion writer, which is to be very direct, be very visual, to be dynamic, and just show how you can style some of the clothes that you make and simplify some of these ideas into something that’s very easy to use and fun to wear and that you can create, depending on your skill level, rather quickly. And even if it takes you a while, it’s just a simple thing that you can pair into your outfit.

Ryssdal: So this is great, actually. And you were not kidding when you were talking about fundamentals and everything, because item one on these sheets I have in front of me now is “how to thread the needle.’ Step one: Get a sewing needle.

Washington: Oh, yes, the 101s are very important. And that’s something that we really learned working with a lot of young teens and tweens, which is, again, if we are going to say we’re a beginner-friendly, we have to be beginner-friendly. And you’d be surprised how many people, adults included, have never really tried sewing because they didn’t quite know how to thread the needle.

Ryssdal: Totally, totally. So who makes the fashion and styling decision that you then put into these envelopes and send out to your, I guess, subscribers, right? Or you put them on the shelf at Joann. I mean, how do I get one of these things?

Washington: You can go straight to SewSquad.com. We sell them right now on our site, and we do new drops every season or so. And I’m lucky enough to be somebody who goes to market appointments and is able to see what designers are making six months ahead of time.

Ryssdal: So you know what’s coming.

Washington: I know what’s coming. And what we like to do is take all of that and think to ourselves, “OK, what can our customer make on their own? What would they want to make? What silhouette would they find very wearable and very interesting, but maybe they just haven’t figured out how to use it yet?”

Ryssdal: So about you and this business, are you going to now leave fashion, style journalism and then be an entrepreneur? I mean, what’s the plan?

Washington: Well, you know, there’s a lot of things ahead of us, Kai. If you want to get in deep, yeah, that’d be great. It depends on how successful this segment goes.

Ryssdal: Glad we got you on the air!

Washington: Exactly! I would love that, my passion is with style and fashion and discovering your own sense of self through the art of fashion. But SewSquad is definitely my No. 1 goal, and I am really excited for it because I think it really fills a gap that has yet to be addressed in this market.