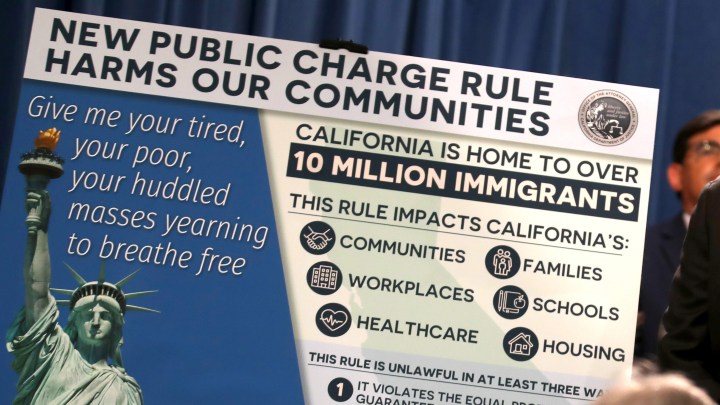 COPY
California attorney General Xavier Becerra looks at a poster that is displayed during a news conference with California Gov. Gavin Newsom at the California State Capitol on August 16, 2019 in Sacramento, California. Justin Sullivan/Getty Images

California attorney General Xavier Becerra looks at a poster that is displayed during a news conference with California Gov. Gavin Newsom at the California State Capitol on August 16, 2019 in Sacramento, California. Justin Sullivan/Getty Images
Listen Now

The rate of child poverty was 16.2% in 2018, slightly down from 2017, according to data released today by the Census Bureau. But experts have expressed concern that a new immigration rule will cause the number of children in poverty to rise in the coming years.

The Trump administration recently announced changes to the “public charge” rule, which is used to determine if non-citizens applying for green cards and immigration status changes can be denied due to dependence on government assistance. The changes could have a chilling effect on enrollment in programs like Medicaid and SNAP, say experts, negatively impacting the children of immigrants, many of whom are U.S. citizens.

Marketplace’s Sabri Ben-Achour spoke on the issue with Dr. Benard Dreyer, professor of pediatrics at NYU and co-author of a National Academies of Science report on reducing child poverty. Below is an edited transcript of their conversation.

Sabri Ben-Achour: Can you draw the link for us? What’s the connection between these rules, which would make it harder for low-income people to get a green card in the future, and child poverty?

Benard Dreyer: What this rule has done is made the entire immigrant community fearful of getting any benefit, including benefits for their citizen children. We know in New York State, for example, that the WIC — Women, Infants and Children — Supplemental Nutrition Program roles have decreased, even though that has nothing to do with the public rule.

Ben-Achour: Basically, you’re saying the real impact here is that immigrants who themselves may actually be eligible to participate in government assistance programs, and whose children certainly are, are too afraid to actually take advantage of them.

Dreyer: Correct. I’m a pediatrician, and I would say the vast majority of my patients are immigrant families. I’ve had parents say, “I’m not going to enroll him in universal preschool,” even though educational benefits have nothing to do with the public charge. There’s just a huge fear factor. The entire immigrant community has been made to feel under siege and afraid that, somehow, this will be held against them.

Ben-Achour: Do we have any idea of how many families might forgo programs that actually they’re OK to use?

Dreyer: A report that was issued in May did indicate that somewhere between 10% and 20% of families who are immigrants were foregoing or planned to forego benefits such as food stamps, Medicaid and housing vouchers. Interestingly, the studies show that even families where everyone is a citizen, 10% of those families are foregoing benefits like Medicaid.

Ben-Achour: To what extent would this increase childhood poverty, and what are the consequences?

Dreyer: We estimate in general that, without food stamps, the poverty rate for children would be 4% to 5% higher. We know that poverty causes stress, which impacts their ability to learn and to succeed in school, and often leads to lifelong, inter-generational poverty. 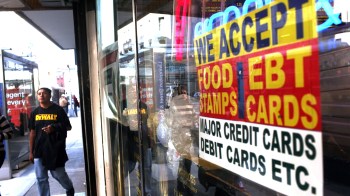