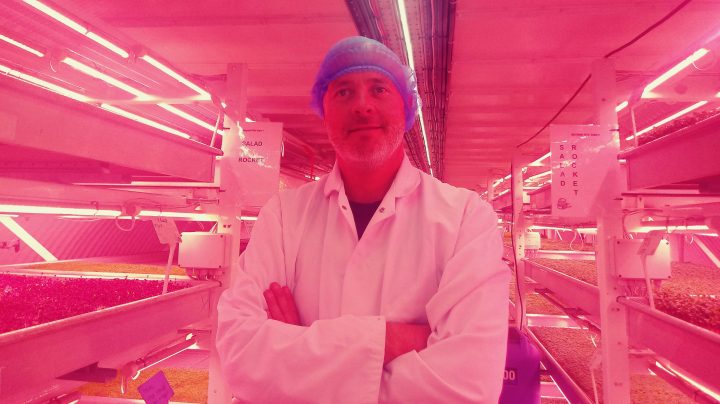 Deep beneath the streets of Clapham, London, in a former air raid shelter, Steve Dring and his colleagues are farming. Vertical farming, that is.

The company Dring co-founded, Growing Underground, is cultivating a wide range of vegetables and herbs in vertically-stacked trays in the confined space. It’s part of a growing trend in Europe and the U.S.

“We have to grow more food, as a planet,” Dring told Marketplace. “Because of climate change, soil erosion and population growth, we need to use technology to find better ways of growing crops more sustainably while intensifying yields. We can no longer rely on conventional agriculture.”

His farm is certainly unconventional. To enter, you have to squeeze into an ancient elevator and then rattle 100 feet underground, reaching a slightly eerie and very non-rural scene: two parallel tunnels, a third of mile long, bathed in a pink light, with 20 or so workers dressed in white lab coats, surgical boots, hairnets and face masks.

“We’re pest-free down here. This clothing is an extra layer of protection,” explained staff member Bethany Thurston, who looked and sounded more like a lab technician than a farm hand. “It’s almost surgical down here, like an operating theater.”

The tunnels were built between 1939 and 1942 to protect the local population from Hitler’s Blitz on the city. Once they were lined with bunk beds for some 8,000 people. Today, they’re lined with a wide variety of vegetables and herbs.

“We’ve got broccoli, salad rocket [arugula], coriander, fennel, pea shoots, sunflower shoots, two types of radish, pink-stemmed and purple, we’ve got a wasabi mustard and a red mustard,” Thurston said, reeling off some of the crops under cultivation.

There’s no soil on this farm. The seeds are germinated on pieces of recycled carpet, grown on trays under the glow of pink LED lighting and bathed in water containing essential nutrients.

The underground farmers have some big advantages over their traditional counterparts. Situated within a major city, they can deliver fresh produce to a large urban market. They have no pests, so they don’t need to spray pesticides. And they never have to worry about the weather.

“We’re not affected by the vagaries of climate change. It’s very predictable. Very controlled. There’s no frost and no heatwaves down here. It’s all standardized,” said Greg Crawford, whose job it is to look after the health of the plants and to trial and develop new crops.

“If we were growing peas out in the open, we’d have three crops a year,” Dring said. “Here, we get 62 crops a year because we’re precisely giving the plants exactly what they want, all year round.”

Dring does not believe that vertical farming will replace the traditional variety, but he thinks it will grow in importance as, in his view, traditional farming alone will not be able to feed the planet.

“We have to produce more food by different methods. The current business-as-usual model of agriculture isn’t fit for purpose,” he said.

But are the conditions of underground farming fit for the workers? Wouldn’t Crawford, for example, prefer to be working above ground?

“We’re at the cutting edge here, so it is very interesting. We’re pushing the boundaries and that is exciting.” Crawford said, adding: “I do miss the sunshine a little bit.”

While Growing Underground is not yet profitable, it expects to be by the middle of next year.