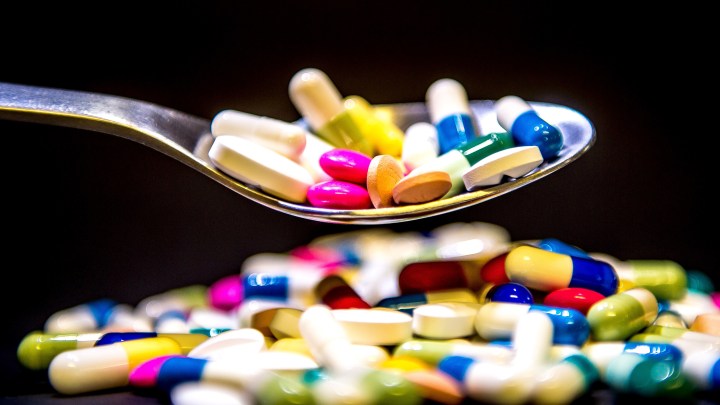 “Nothing in your sight is going to be less than $10,000 for the bottle,” McCullough says. These pill bottles are what she refers to as “the battle ground.”

They’re only found in specialty pharmacies like this one. But because of the price tag, the medication is closely monitored by the entity often paying the bill, known as the pharmacy benefit manager.

Cancer treatment has never been cheap. But the cost of oncology drugs in the U.S. has become jaw-dropping, and where there are big dollars, business interests compete. And in the world of oncology, that “battle ground” is between cancer doctors and pharmacy benefit managers.

Pharmacy benefit managers essentially oversee the drug side of a health insurance policy. CVS Caremark, OptumRx and Express Scripts are the big three. And these days, PBMs aren’t just deciding what cancer drugs an employer’s health plan will cover. They’re also competing with specialty pharmacies and selling the chemotherapy medication themselves.

From IV To pills

Cancer clinics and PBMs weren’t so much at odds back when chemotherapy required IV infusions.

These days, chemo can often be delivered through oral medication. The pills — worth hundreds of dollars apiece — are packed up and shipped to patients.

While this can be done from anywhere, McCullough argues that Tennessee Oncology’s pharmacy is best suited to serve its own patients.

“These medications need management,” she said. “Patients need to be closely monitored. Patients need a relationship with their healthcare provider.”

Big oncology practices around the country have joined forces. The Community Oncology Alliance, based in Washington, D.C., has been gathering grievances from patients to build a case that would convince lawmakers to rein in the PBM industry.

Nicole Pankey, who lives outside Nashville, has become one of those cautionary tales. She didn’t even know who her PBM was until CVS Caremark started looking into her prescriptions.

Pankey, a 41-year-old former Army crew chief turned financial analyst, was diagnosed with stage 4 pancreatic cancer last year. She wanted to start chemo right away to give her the most time to see her kids grow up. To do that, she needed a drug that runs $500 a dose.

Her PBM required her to use its pharmacy, which is customary. But they were out of stock.

“They called me and said, ‘Oh, we can’t fill your prescription. I’m sorry.’ And I was like, ‘Excuse me?’ I was not happy with that answer,” she said.

Pankey spent hours on the phone, pleading with anyone who’d listen. Eventually, the PBM agreed to pay for the medication at the doctor’s pharmacy. So her chemo regimen stayed on track.

“The thing is, I pushed. I’m strong enough to push,” she says. “It could literally be the difference of life or death if I don’t get my chemo or my white blood cells drop too low. You know, I don’t know if my mother would do that. My mother probably would have stopped at the first ‘no.'”

The case for PBMs

PBMs are easy targets. Their job often involves questioning what a patient’s doctor has prescribed, or suggesting a low-cost alternative. Lawmakers have scrutinized how cozy they’ve become with pharmaceutical companies; executives have even been called to testify to Congress.

“Over the last three years, we have saved our clients and their members $141 billion in drug costs,” said Derica Rice, president of CVS Caremark, last April.

The Pharmaceutical Care Management Association, a PBM lobbying group, said in a statement to Marketplace that its role helps encourage competition among drug manufacturers. It said running its own specialty pharmacies helps provide a “seamless experience” for patients.

And giving all the power back to cancer doctors and their pharmacies isn’t a perfect solution, either, according to Vanderbilt health policy professor Stacie Dusetzina.

Dusetzina added that physicians and pharmacists need someone making sure they go with the cheapest alternative that’s effective.

“Which basically translates to trying to keep your premiums on your health insurance lower, so your employer can do things like pay you more, rather than just paying for your health benefits,” she says.

But cancer patients aren’t thinking about their monthly insurance premiums when they run into a cost control measure that stands between them and potentially life-saving medication.

And cancer drug prices are only increasing.

“If PBMs were doing such a great job, you would see spending go down,” said Ted Okon, chief executive of the Community Oncology Alliance.

Okon warned that if patients start to decide that the cost and the headache isn’t worth the effort, the struggle with PBMs could even turn back advances in cancer care.