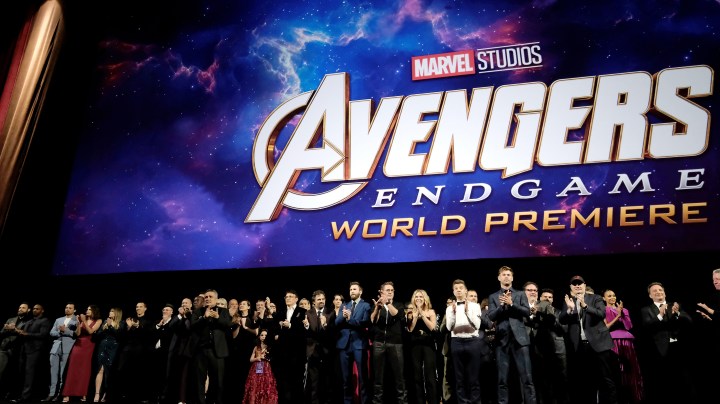 COPY
The cast of the "Avengers: Endgame" on stage at the movie's world premiere in Los Angeles, California in April. Alberto E. Rodriguez/Getty Images for Disney

The cast of the "Avengers: Endgame" on stage at the movie's world premiere in Los Angeles, California in April. Alberto E. Rodriguez/Getty Images for Disney
Listen Now

“Avengers: Endgame” is back in theaters.

Yeah, that “Avengers: Endgame” — the one that opened in late April and was actually still playing in some parts of the country.

But this time moviegoers will see some extra footage after the credits, including a deleted scene and a sneak peek of the new Marvel movie, “Spider-Man: Far from Home.”

Re-releases aren’t new, but Marvel is doing this one very quickly. It’s calling the move a “Bring Back event.” And the thinking is that it’s trying to break the box office record for the highest-grossing film of all time. That title is currently held by 2009’s “Avatar.”

The news — combined with the prospect of taking the top spot — was met with great excitement online.

Others were more cynical about the decision.

And according to Paul Hardart, director of the entertainment, media and technology program at the New York University Stern School of Business, Marvel has such a loyal fanbase that the “Avengers: Endgame” re-release is probably a great idea, and one that isn’t going to cost very much to promote.

“They’ve already got the brand equity built in,” Hardart said. “People know about it, so they won’t spend that much more on incremental marketing costs, so it’s really very smart.”

“Avengers: Endgame” is only about $40 million away from breaking the box office record. Can it do it this time around? Early reports are optimistic about Marvel’s shot at success. Stay tuned.