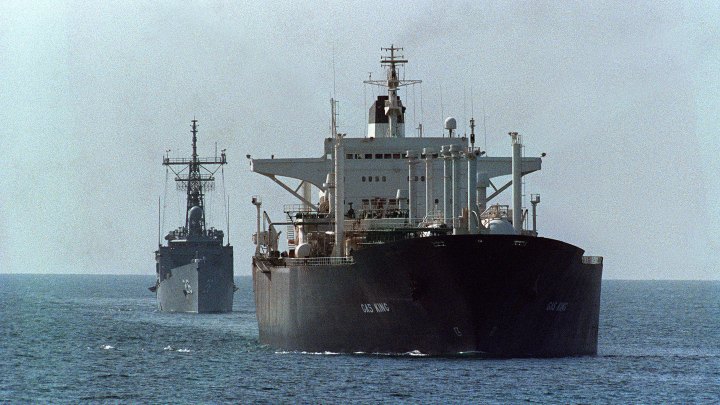 COPY
An oil tanker is protected by the U.S. guided missile frigate USS Gallery in the Strait of Hormuz in 1988. In a tweet Monday, President Donald Trump questioned the United States' decadeslong protection of the strait. NORBERT SCHILLER/AFP/Getty Images

An oil tanker is protected by the U.S. guided missile frigate USS Gallery in the Strait of Hormuz in 1988. In a tweet Monday, President Donald Trump questioned the United States' decadeslong protection of the strait. NORBERT SCHILLER/AFP/Getty Images
Listen Now

President Donald Trump took to Twitter Monday and asked this question about the Strait of Hormuz, which connects the Persian Gulf to the open ocean:

“Why are we protecting the shipping lanes for other countries (many years) for zero compensation?”

The implication is that the United States might take a step back from securing the strait.

Last year, 21 million barrels of oil per day flowed out of the Strait of Hormuz, according to the Energy Information Administration. But these days, less than 10% of that comes to the U.S.

“Still, the U.S. is importing from the Middle East, but the dependency is not that significant,” said Sara Vakhshouri of SVB Energy.

She said that reduction in oil imports is thanks, in large part, to fracking, which has boosted domestic oil production.

That’s why Vakhshouri thinks the administration has some leverage.

“They’re suggesting, ‘Why [should] our taxpayers … pay for the security of oil that goes to India or to China? They need to contribute,'” she said. “But I don’t think they’re suggesting that the U.S. should totally leave the Strait of Hormuz.”

But Trump did write, “All of these countries should be protecting their own ships.”

It’s unclear what the consequences would be if the United States did pull out of the strait.

Kloza said oil traders and the news media may be exercised about the strait, but in the end, he expects we’ll be paying the same prices at the pump this summer.