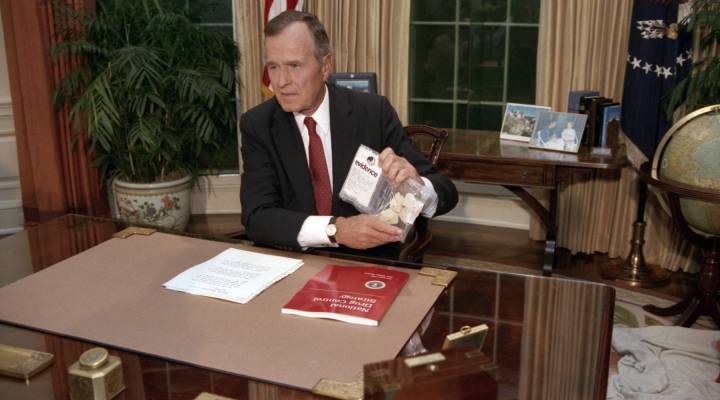 President George H.W. Bush addressing the nation on Sept. 5, 1989. The president illustrated the threat of drugs by holding up a baggie of crack he said had been seized across the street from the White House. Courtesy: George Bush Presidential Library and Museum
The Uncertain Hour

President George H.W. Bush addressing the nation on Sept. 5, 1989. The president illustrated the threat of drugs by holding up a baggie of crack he said had been seized across the street from the White House. Courtesy: George Bush Presidential Library and Museum

In his very first address from the Oval Office, President George H.W. Bush looked into the camera and held up a clear plastic baggie of chalky, white chunks.

“This is crack cocaine, seized a few days ago by drug enforcement agents in a park just across the street from the White House,” he said. “It’s as innocent looking as candy, but it’s turning our cities into battle zones.”

No one was safe from drugs, Bush warned, and it was time to get tough.

Overall drug use, and the use of crack in particular, was in decline by 1989, but Bush turbocharged the war on drugs that night. He’d go on to spend $45 billion, more than the previous four administrations combined, and most of it on law enforcement. It all started with this one baggie of crack, but the story of how Bush got that political prop is far more complicated than what he told the American people.

Lafayette Park, where the drugs were seized, isn’t your typical city park. Because it’s so close to the White House, it’s crawling with tourists and Secret Service agents. In fact, there wasn’t much crack in downtown Washington at all, said Don Shots. In 1989, Shots was selling drugs himself, across town in northeast D.C.

“Nothing is impossible when it comes to drugs,” Shots said. “But when you break it down and really think about it, nobody sells crack in front of the f— White House.”

So what were the odds someone would get caught there just a few days before a highly anticipated speech about drugs? And that Drug Enforcement Administration agents would just happen to be there looking for them? Mike Isikoff, then a reporter at the Washington Post, started asking around.

The view of the White House from Lafayette Square in Washington, D.C., November 2018.

U.S. Park Police told him there had never been a crack arrest in Lafayette Park. Isikoff went on to ask William McMullan, the special agent in charge of the DEA’s Washington office who had been setting up undercover buys in drug-flooded neighborhoods like Shot’s.

McMullan told Isikoff that he got a call from the DEA a few days before Bush’s speech. The agency wanted to know if there were any buys happening around the White House, or if the DEA could move one there. Isikoff remembers McMullan sounding proud of how hard it was to make that happen.

A couple of weeks after Bush’s speech, Isikoff published his discovery on the front page of the Post. The revelation snowballed into a scandal for the White House. Dana Carvey performed a parody of the speech on “Saturday Night Live.”

Bush administration officials, at the time and today, said they didn’t ask for anything special. They claimed the White House just wanted drugs from DEA inventory, something that had been previously seized close by.

We still don’t know the exact cause — a request from the White House, some overeager person at the DEA or a miscommunication between offices — but the fact remains: There was a special drug buy set up for the speech.

References to a crack sale near the White House appear in early drafts of Bush’s speech. This one is dated August 17, 1989. The actual buy wouldn’t happen for two more weeks.

The kid who sold the crack that wound up on Bush’s desk is named Keith Jackson. He was 18 years old, a high school senior, and the deal at Lafayette Park changed his life forever.

There’s so much more to this story — what happened to Keith, the decline of crack in America and how it’s affected the opioid epidemic. You can hear it all on the new season of The Uncertain Hour.