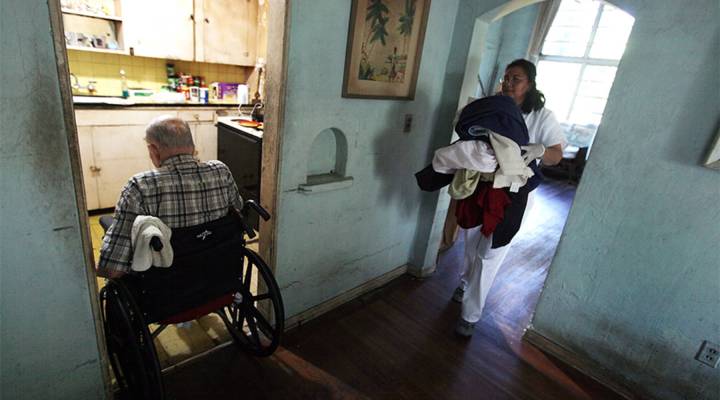 Caring for the elderly is getting more and more expensive at a time when Americans are living longer than ever. For General Electric, that means that premiums on its 300,000 long-term care insurance policies aren’t even close to covering the cost of coverage. Marketplace senior economics contributor Chris Farrell spoke with host Kimberly Adams about the rising costs of long-term care. Below is an edited transcript of their conversation.

Kimberly Adams: Long-term care insurance, what is it exactly?

Chris Farrell: Long-term care insurance are the policies that cover costs associated with going to a nursing home, being in an assisted living center and, most importantly in recent years, in-home care. So personal care aides might come and help take care of you as you’re frail and you’re elderly; you know, dealing with some of the issues of getting through everyday life.

Adams: And General Electric was pretty involved in this industry?

Farrell: Yes. They’ve been involved in the industry. They used to be in the health care industry, they got rid of that, but they still had these remaining policies. And the core of the problem that GE is dealing with right now has to do with these long-term care insurance policies. What’s happened is that medical costs keep going up. Americans are living longer, on average. And the people who bought these policies? They’re not dropping them. So GE needs to put required reserves, the regulators are saying about $15 billion, to back these policies. Because the premium payments? They’re not even coming close to covering the costs that they’re incurring. Put that in context: GE’s dividend payments is [something] like 4 billion.

Adams: And how is the long-term care insurance market doing right now?

Farrell: It’s doing terrible. To butcher a phrase, what’s bad for GE is bad for America because the long-term care insurance market — it’s not just with GE —that private insurance market has been shrinking and shrinking dramatically. And then we have this sort of patchwork quilt system that we’ve created. Medicare doesn’t cover very many long-term care costs. Medicaid is really our public long-term care service policy. But the problem with Medicaid is it’s a means-tested program. You have to be, in essence, poor in order to qualify. And so what’s happening is we’re turning to the American family and we’re saying, “American family, take care of your elders.”

Adams: And that is something that is costing many of us a lot. I heard a number that informal care provided by friends and family can add up to something like $470 billion a year. But it’s a strain.

Farrell: It’s a real strain, and that number, which comes from AARP, is a legitimate number, and I think it way underestimates the costs that families are absorbing. Remember, lots of times people have to go from full-time work to part-time work, they have to go from part-time work to quitting their job in order to take care of their elders. And a lot of millennials — one in about 25 percent of caregivers — are millennials, people who are just launching their careers. And they are taking time off, and they’re spending a fair amount of money taking care of their elders. So this informal care system is totally strained. We have smaller families, and there really are limits to what the families can do. Frankly, I think we’re way past those limits.

Adams: Is there much movement here in Washington, D.C., to help on this issue?

Farrell: I think the term “health care” is toxic in Washington, D.C., so if you say “long-term care,” that’s even more toxic. The experts keep talking about the need that we should have some sort of a national system, perhaps emulating what Japan has created or Germany has. And we all know that the population is aging, but I think Washington is going to learn the same lesson that GE and its investors learned the hard way: You can ignore this cost for a period of time, you can. But eventually that bill comes due.