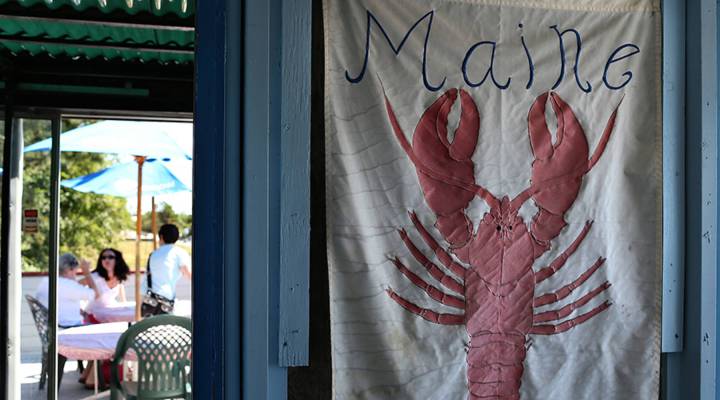 The sun was already setting on a recent Thursday evening at Sanford High School in southern Maine as teacher Kathryn Peppe worked with a student on a lengthy packet of algebra problems. Yet for Peppe, the work day isn’t even close to over.

At 5 p.m., she’ll leave the school to teach a local adult education class until 9 p.m. On Mondays and Wednesdays, she drives an hour north to teach at a community college. The 14-hour shifts leave her exhausted.

“I used to love running. But I’ve had to give it up. And honestly, I haven’t run in two months,” Peppe said. “Which is horrifying, because it’s my stress relief. But I don’t have time to do it.”

The extra jobs are necessary to help pay off the mountain of student debt Peppe accrued at the University of Southern Maine. She graduated in 2014, with a bachelor’s degree in math and two master’s degrees in special education and literacy. And like most students, Peppe took out loans that now total more than $100,000.

“Usually, I try not to think about it,” Peppe said. “But when I do think about, it’s like a hole you can never dig your way out of.”

For Peppe and other graduates in Maine, that debt is slightly less daunting thanks to a decade-old policy called the Opportunity Maine tax credit. It works like this: if you recently graduated from college, and choose to live and work in the state, you can take a tax credit of more than $4,000 of your annual student loan payments.

For years, the program was for graduates of in-state schools. But two years ago, it was expanded to any recent college grad who lives and works in the state.

“We needed to create an incentive for Mainers and those who came into our schools to stay here, and live, work and play,” said former Democratic State Sen. Justin Alfond, who helped create the program.

That’s particularly important in Maine, the state with the oldest median age in the country – and it’s getting older. The trend is part of why the Maine Department of Labor recently projected the state will add fewer than 100 new jobs  over the next eight years.

In the face of that anemic forecast, business groups are now looking towards the Opportunity Maine tax credit as part of the solution to help convince young workers to move to the state full-time over the next decade.

“Wage scales tend to be lower here than Boston or New York or LA. So how do we compete?” said Yellow Light Breen, the president of the Maine Development Foundation. “And I think leveling the playing field, on helping people pay off student loan debt, is a huge opportunity for Maine to compete.”

Last year, about 9,000 people used the tax credit – only a fraction of those eligible. Maine lawmakers, including Democratic State Sen. Justin Chenette, recently pushed to more than double the program’s marketing and create a new full-time state employee to focus on getting more graduates aware of the tax credit.

“We want young people from all across the country to move here. To live here. To start families here. And to have a new life here,” Chenette said. “And I think that is the message we have to get out — a little bit more loudly.”

Damon Jones, a professor of public policy at the University of Chicago, is currently studying a federal student loan forgiveness program for teachers. He said it’s unclear if loan forgiveness, much less tax credits, can lead people to move. Jones has found these programs to be confusing for graduates to wade through, even just to determine if they’re eligible.

“That is definitely a challenge that needs to be overcome if this program has any chance of succeeding,” Jones said.

With her three jobs, math teacher Kathryn Peppe made about $55,000 last year, yet owes about $300 per month in student loans. But with the tax credit, she’ll get more than 40 percent of those payments back on her tax return. Peppe is planning to use next year’s refund to figure out what to do with her old car.

“So I could either fix the problem. Or save the money for a new car,” Peppe said.

Business leaders in Maine have a new initiative called “Live and Work in Maine.” Their website points prominently to the student loan tax credit as evidence the state “puts its money where its mouth is.”