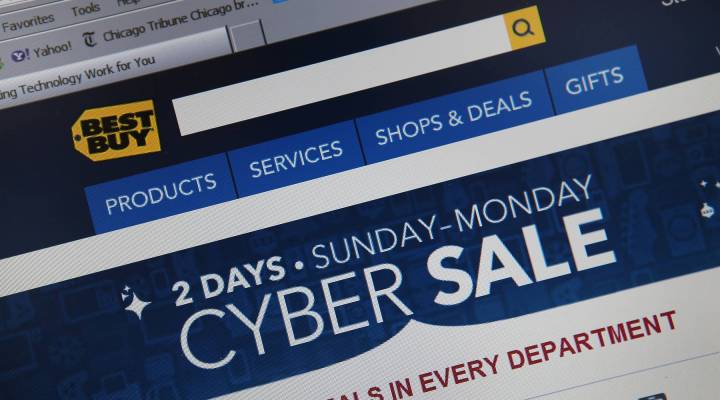 COPY
In this photo illustration, electronics retailer Best Buy advertises Cyber Monday sales on the store's website in 2012. Limited sales can be an effective way to replicate the conditions that lead to impulse spending online. Scott Olson/Getty Images

In this photo illustration, electronics retailer Best Buy advertises Cyber Monday sales on the store's website in 2012. Limited sales can be an effective way to replicate the conditions that lead to impulse spending online. Scott Olson/Getty Images
Listen Now

Online shopping has become a way of life for many consumers: You can find almost anything at any time. But online retailers are trying to combat a practice that is costing them hundreds of billions of dollars: shoppers adding items to their cart and then abandoning them before purchase.

It’s something Janea Wilson does all the time. The 30-something English instructor considers herself a skilled shopper, looking for deals and comparison shopping. Recently she’s been searching for some home goods for the holidays, so she put a few items in her cart on the Bed Bath & Beyond mobile app. They’ve been languishing there for two weeks.

“Because it’s not real. You’re not spending actual time in a store, so you’re just building this cart,” she said.

According to the Baymard Institute, which studies user experience for e-commerce, about 70 percent of virtual carts are abandoned before purchase. Reasons include unexpected taxes and fees, having to create an account or simply that the checkout process is too complicated.

Wilson said she’s much more likely to go through with a purchase “if there’s promo codes, if I can use Apple Pay or something where I’m just paying with my thumb versus having to get up and go find my credit card somewhere.”

Baymard researcher Lauryn Smith said companies could probably recover about a third of abandoned transactions, equal to $260 billion in sales, in some cases just by making small formatting changes to the payment process — “generally simplifying the amount of information that’s asked for the user to the fewest forms possible.”

She said companies should lose the “Address 2” line, shrink the phone number into one field instead of three and keep the coupon code field as inconspicuous as possible.

“Because what you’re basically saying with that coupon field is you’re just asking users to leave your site,” she said.

David Marrinan-Hayes, CEO of Ve Global, has worked with companies like Hewlett Packard and the Body Shop to increase online sales. He said most of his clients have already addressed all the low-hanging fruit of optimizing payment forms and now they’re asking questions like, “Do I need to take some of my marketing budget and move it away from, say, coupon codes into subsidizing my shipping?”

Thanks to Amazon Prime, many shoppers will stop dead in their tracks at the sight of a shipping fee or a delivery time longer than 48 hours.

But consumer behavior expert Ravi Dhar, a professor at Yale University, said to get beyond the marginal gains from payment forms and shipping costs, online retailers need to address a bigger philosophical challenge: You don’t get the satisfaction of getting your purchase immediately.

“We find that because of the delayed gratification, online tends to be less impulsive,” he said.

A lot of shoppers, he said, use their virtual carts as wish lists or comparison tools to get a different kind of pleasure from the shopping experience — the feeling that they’re making the right choice, backed by research and deep consideration.

Still, he said in the last couple of years, e-commerce sites have gotten better at replicating the conditions that lead to impulse spending, like showing you how many people are looking at an item or holding sales with a countdown clock.

“The idea of flash sales is really to mimic scarcity, limited time, excitement, it may not be there tomorrow,” he said.

Shopper Wilson said these are strategies that could help her get over her cart abandonment issues at Bed Bath & Beyond.

“It would be nice,” she said. “Maybe not so nice for my credit cards and my pocketbook.”

And she knows she won’t have to wait too long for that next 20 percent off coupon.