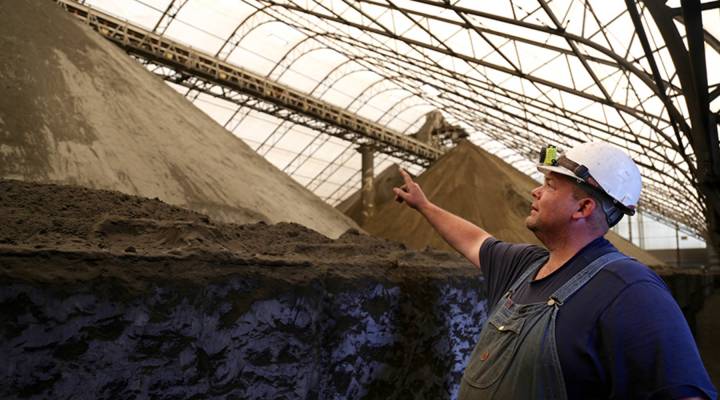 COPY
ILWU Local 4 President Cager Clabaugh says the tariffs are already hurting work at the port. An order for 6,000 tons of copper ore on route to China was recently canceled. The mountains of copper now sit unused in a warehouse at the Port of Vancouver. Molly Solomon/OPB

ILWU Local 4 President Cager Clabaugh says the tariffs are already hurting work at the port. An order for 6,000 tons of copper ore on route to China was recently canceled. The mountains of copper now sit unused in a warehouse at the Port of Vancouver. Molly Solomon/OPB
Listen Now

For many who work at the Port of Vancouver in Washington along the Columbia River, the impacts of President Donald Trump’s escalating trade war are already here.

“Usually this yard is filled with steel, and I’m not seeing that,” said Cager Clabaugh, the president of the local longshoremen’s union.

Less steel on the docks is a big problem. The Port of Vancouver handles the second-largest volume of imported steel on the West Coast. Steel imports make up about a third of its revenue, and officials are predicting a decline of at least 5 percent this year.

Steel makes up more than a third of the Port of Vancouver’s annual revenue. This year the port is forecasting a 5 percent decline.

The loss of imports could mean fewer hours for part-time longshoremen like Amber Nelson.

“If we lose that standard of living, my family will suffer in ways we have not had to deal with before,” Nelson said.

It’s something the port has been closely monitoring since Trump slapped a 25 percent tariff on imported steel from China. The U.S. Chamber of Commerce said nearly 1 million jobs in Washington are supported by trade. And it’s not just imports — $6.7 billion in state exports are threatened by new tariffs.

From cherry growers in eastern Washington to steel importers on the coast, the state’s trade-dependent economy is bracing for a hit. U.S. Sen. Patty Murray, a Democrat from Washington, says her state has more at stake in a trade war.

“States like ours are the most trade-dependent state in the nation,” Murray said. “We have people whose job depends on this from a broad range of people. So the impact on our economy could be very quick and it could be very tough.”

Slabs of steel being unloaded from a ship at the Port of Vancouver.

Back at the Port of Vancouver, uncertainty surrounding the trade climate could have far-reaching consequences. Port CEO Julianna Marler worries that tension around tariffs could lead customers to find other alternatives or go elsewhere for products.

“Once you lose business, if they go to another country and are able to start getting a stable supply, it’s hard to get that business back,” Marler said.

In the meantime, Marler and her staff have been making additional trips to Asia to reassure their clients during these uncertain times.