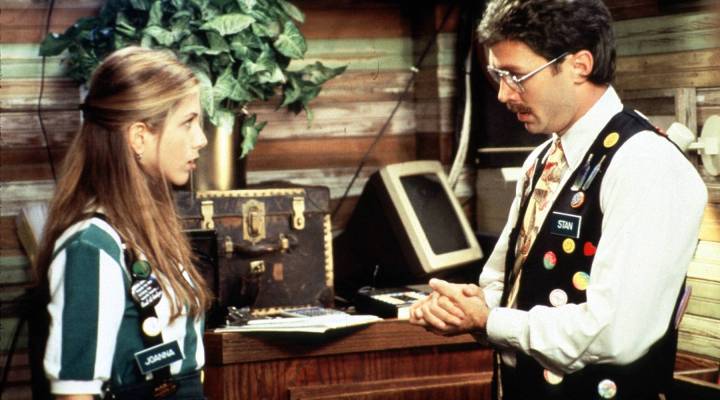 In the light of the #MeToo movement, we’re taking a look at abusive behavior in the workplace — not just sexual harassment, but incidents that involve bosses who are aggressive and bully their employees.

Karlyn Borysenko, organizational psychologist and author of the book  “Zen Your Work,” has studied stressful and toxic workplaces, as well as worked in one herself. She would find herself driving home from work, screaming and crying, only to realize how much her job was hurting her after she went on vacation.

The experience led Borysenko to explore best practices for coping with a toxic workplace, which allowed her to focus her energy on formulating an exit strategy. She joined us to discuss some of those potential coping mechanisms. Below is an edited transcript of the interview.

Karlyn Borysenko: The whole premise of my book started when I worked in a really toxic place. I didn’t start doing the Zen stuff and the mindfulness stuff in an ideal environment. But it was because of doing that stuff and keeping my perspective in check that I was able to reduce my stress levels enough to create an exit strategy.

David Brancaccio: What are some of the things that you did short of just getting out of there?

Borysenko: The first thing I did was to start reserving judgment about the people I was working with. If my dialogue is “these people are out to make me miserable every day,” that’s going to make me miserable. If my dialogue is “I’m around these angry people but I don’t have to let them impact me,” then I have more presence of mind to be able to make better decisions to make the moves to get out of the organization.

Brancaccio: And had you had your training in organizational psychology at the point that you ran into this awful workplace?

Borysenko: Yes, I was finishing up my Ph.D. so I was living out my dissertation in real time which was not an easy thing to do. But at least I had the background to be able to understand it a little bit more and it really set the basis for the work I do today.

Brancaccio: If someone else is actually the problem when there’s a workplace conflict, they’re the ones being a jerk, why should you be the one who adapts?

Borysenko: Because you’re responsible for 50 percent of every relationship you have. So it’s less about adapting for the other person and letting them off the hook, then it is about creating a better experience for yourself and reducing your own stress in the process by not giving it your energy and your focus.

Brancaccio: What do you think that in the context of the #MeToo movement, aren’t we rethinking some of that? That there comes a time when people don’t have to adapt to bad behavior, that we call that bad behavior out, and the other person should either change or be replaced.

Borysenko: The #MeToo movement is an empowerment issue. And it’s wonderful that so many people are standing up and speaking up and saying “I will not tolerate this.” But the fact of the matter is, there are still a lot of people who are experiencing harassment and toxicity in the workplace that aren’t speaking up. And when it comes to these situations, you really have a choice, you can either act to stop it or continue to allow it to happen. So this is about people really looking and saying “I am valuable enough where I might risk losing my job over speaking up and trying to get out of this situation.”

Brancaccio: The formal approach to some of these conflicts in the workplace is they sometimes rise to a point where you want to talk to human resources. We also know that that can have negative consequences, there can be retaliation.

Borysenko: Research tells us that as many as 80 percent of people who report being targets of workplace bullying in organizations either have retaliation against them from HR or senior leadership, or that organization does nothing at all to help them. So it’s not about not speaking up in those situations though. It is just being aware that speaking up might have consequences and making the choice to say “it is worth putting my job on the line to empower myself not to be treated like this any longer.”

Brancaccio: Now for situations that don’t rise to however one might define a toxic workplace,  but a conflict at work, your method is to be introspective and self-aware and approaching that problem?

Borysenko: Absolutely. A lot of problems at work are simply a matter of changing your perspective. If you start the day off on the wrong side of the bed, that is going to influence how you perceive absolutely everything that happens to you. So really making that effort, really from the moment you get up to say “I’m going to have a good day to day. I’m not going to let people get to me today. I’m not going to participate in office gossip today.” Just doing those things can cut down a lot of the interpersonal nonsense that the average worker experiences.

Brancaccio: So you get up in you’re in a good mood. You’re gonna take a positive approach and get a lot of work done that day, and then the horrible boss starts screaming at you. How is it that you can have power in that situation if someone is yelling at you and they are your superior?

Borysenko: Well, I know going into that situation that I can’t control my boss, I can’t control if they’re choosing to come in and yell in the office. And I’m going to say “you know what? There’s something going on with them that I probably don’t know about. It’s not about me. It’s about what’s going on with them.” Am I going to allow this situation to stress me out and make a bad day for me? That’s a choice that we all make every single day. You know positive psychology research tells us over and over and over again, people choose to be happy. They’re not happy because of what happens to them, they make the choice to do it regardless of what happens to them. And that choice is always available, if you just choose to look at things differently.

Brancaccio: In other words, you may have a terrible situation at work that has got to change, it is not sustainable. But that that doesn’t have to drive you personally to despair, it should drive you to action of some sort.

Borysenko: Sure, and that direct action could be reporting them, it could be leaving. But it doesn’t necessarily mean that you have to let that person impact your mood. That’s a choice.

Brancaccio: But this is a good place to really understand what it is you’re arguing. You’re not saying just lump it. You’re not saying don’t report it to HR or managers. But you are saying that you might have to change your thinking to solve the problem.

Borysenko: Absolutely, I’m not suggesting that people should not speak up when these types of things are happening to them. What I am suggesting is that A) they have to decide whether or not it’s really a battle that is worth fighting to them. And B) just being aware of the consequences of what might happen when you speak up. I am completely for people empowering themselves in these situations and getting themselves out of negative working environments and finding a place that they love to work.

Read the chapter “Working with Enemies” from Borysenko’s book “Zen Your Work” here.