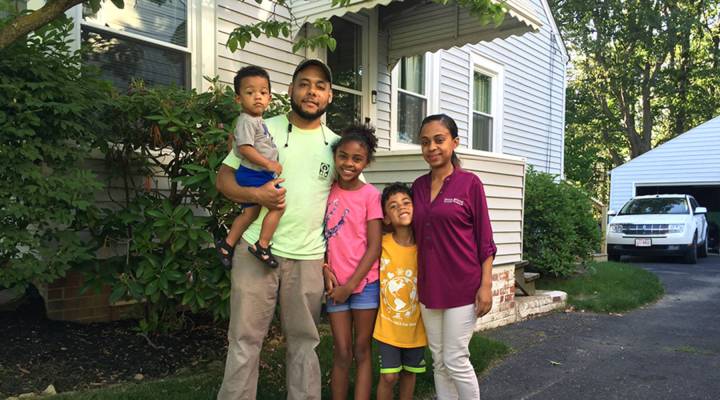 COPY
Erin Bullock and Gabby Jacobs are renting this house in Lyndhurst, Ohio, from tech startup Divvy Homes, with an option to buy within three years. Amy Scott/Marketplace
Divided Decade

Erin Bullock and Gabby Jacobs are renting this house in Lyndhurst, Ohio, from tech startup Divvy Homes, with an option to buy within three years. Amy Scott/Marketplace
Listen Now

Gabby Jacobs and her husband, Erin Bullock, were in a battle with their landlord, and they were losing. They were living in Bedford, Ohio, outside Cleveland. There was no heat in their daughter’s room. The stove didn’t work. The landlord refused to make repairs. The time had come to buy a place of their own.

“It was a big jump for us, but we always knew homeownership was a big plus, because it would be ours,” Jacobs said.

The couple had a lot going for them, including good, stable jobs. She’s an administrative assistant for a waterproofing company; he’s a plumber. Even with three young kids, they’d saved enough for a decent down payment. But their credit scores, around 600, were too low to qualify for a mortgage. Many lenders require at least a 620.

“So very close, but not close enough,” Jacobs said. Bullock, 31, had defaulted on a student loan.

For Jacobs, 29, it was a matter of inexperience.

“I have no established credit,” she said. She told her real estate agent to hold off, “and she was like, ‘Let me mention this program to you guys. I think you would qualify.’”

The program is offered by Divvy Homes, one of several tech startups trying to disrupt the way we buy homes. Here’s how it works: You pick the house you want to buy — not just any house, but we’ll get to that in a minute. Divvy buys it. You pay Divvy a down payment of as little as 2 percent. The company then leases the house to you with an option to buy within three years, and around 20 percent of your monthly rent goes toward what Divvy calls “equity credits.” After three years, renters own 10 percent, typically enough to qualify for a mortgage and buy Divvy out.

“We see it as a new way to own a home and provide access to home ownership for everyone,” said Adena Hefets, one of Divvy’s founders. Like many startups, the company grew out of the founders’ own problems. Hefets’ parents had had trouble getting a mortgage and had used seller financing. Her co-founder, a serial entrepreneur, also couldn’t get a home loan.

“So we kind of came together and said, ‘What if you can’t buy an entire home, but how could you buy little pieces of it and still be able to invest in a house and get the value of an appreciation in a secure asset?’”

At first, Jacobs was skeptical. She’d looked into other rent-to-own deals and thought they were shady. Many of them are, saddling unsuspecting buyers with hidden costs and rarely ending in homeownership. But her realtor convinced her Divvy was legit. The company only buys houses in good shape and covers taxes, insurance and any major repairs.

“We met the criteria, and we were like, ‘OK, we can start looking,’” Jacobs said.

A few months ago they moved into a four-bedroom Cape Cod on a quiet street in the Cleveland suburb of Lyndhurst. There’s a play set in the backyard and a new deck, with huge oak trees that block their view of a nearby shopping center. They’re paying a premium for it. Divvy bought the house for just $122,000. Jacobs and Bullock pay $1,440 a month toward their purchase price of $136,000. The payments are “steep,” Jacobs said, but they decided it was worth paying more to get out of the house they were in. And, said Bullock, “now that we have our own place, we’ve kind of got a sense of accomplishment. You’ve got a secure place for your family.”

Unlike many rent-to-own deals, if they decide they can’t or don’t want to buy, they’ll get at least some of their money back. If they stay for the full three years and then walk away, they’ll get 10 percent of either the appraised or sold value of the house, said Hefets, minus a small share of broker fees. If they leave or default before three years, they’ll get back half of the equity they’ve built.

Jonathan and Debra Bruce bought their home from Divvy a few months after moving in after his credit score rose more quickly than expected.

The model has its skeptics. Sarah Mancini, a lawyer with the National Consumer Law Center, has been tracking “alternative” homebuying schemes.

“The idea of any of these alternatives is they’re premised on the idea that you will eventually qualify for a mortgage to buy this house,” she said. “But if you can’t qualify for a mortgage today, it’s difficult to assure you that you will be able to in three years.” Most people considering rent-to-own deals would be better off saving and working on their credit until they can quality for a traditional mortgage, she said.

Divvy screens its customers carefully, Hefets said. The company only considers people who have been working for at least a year and have a FICO score above 550. It’s OK if they’ve had some financial trouble, as long as they haven’t filed for bankruptcy in the past 12 months and they’re making payments on any debts.

“We don’t want to underwrite anyone who we don’t think will have the opportunity to buy us out in three years from now,” she said.

The company also invests in houses that cost less than $150,000 in neighborhoods where prices are expected to rise — so far in the Cleveland, Atlanta and Memphis areas. Hefets wouldn’t discuss specific numbers, but said Divvy has done more than a dozen deals since it launched in January.

At least one of those deals has already gone from rent to own. Jonathan Bruce, 55, is an Air Force veteran, but his damaged credit — from a previous foreclosure — kept him from getting a VA loan, a mortgage guaranteed by the Department of Veterans Affairs. Then he saw a Divvy ad on Facebook. He and his wife, Debra, 41, picked out a little brick bungalow in South Euclid, Ohio. “It was a rehab,” he said. “Totally rehabbed, from top to bottom.”

Then they got a surprise.

“Basically, the first day we moved into the home, my credit score rose up,” he said. “So I started the process with the VA.” He qualified for a mortgage, and they bought Divvy out within a couple months — for $16,000 more than Divvy had just paid for the house. Still, the house was “something to call our own, something for us that we both have together,” Debra said. “And no landlords.”