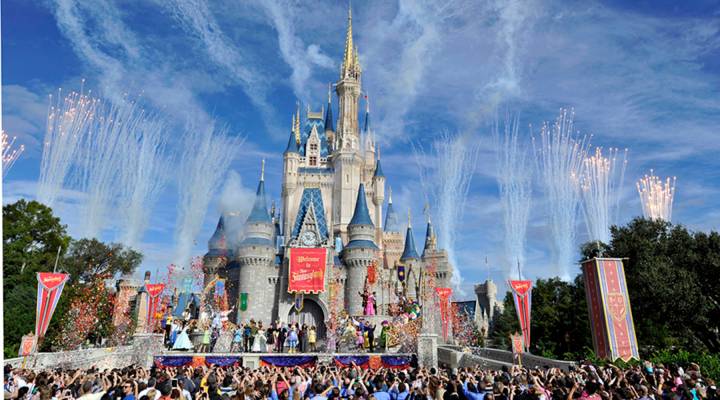 August Rush Ashbaker had been a huge Harry Potter fan for as long as she could remember. The college student imagined she’d belong to House Gryffindor. And then she joined, thanks to a visit to Universal Orlando’s Wizarding World of Harry Potter.

Strolling about the park in a black cape and a wand in hand in 90-degree heat, she noted, while laughing: “I am very, very, very hot.”

Rush Ashbaker flew down from Philadelphia with her friend Willow Tracy who had just graduated from college. Tracy’s family had been planning the five-day trip to the theme park for about a year.

“People of all ages. There’s something for them,” Tracy said. “There’s stuffed toys for the littlest kids. Booze for the adults. All the wands and costumes for people who are die hard serious fans.”

There are also performers and “there’s an actual King’s Cross Station in London that like carries people on trains to places they need to go, but we have this fake version here,” Tracy added.

More than 112 million tourists flocked to the top 25 theme parks across the United States last year according to the Themed Entertainment Association’s Global Attractions Attendance Report. Most of them — 75 million — went to Orlando, Florida. Recreating the magic of blockbuster movies and books is one of the ways theme parks attracted tourists like Rush Ashbaker and Tracy to Orlando. The Harry Potter park opened its doors in 2010, and other parks like Jurassic World and Pandora — The World of Avatar have opened since then. In all, there are six different major parks in the Orlando area with different themes.

“Historically tourism in Florida was about the beach,” said Rick Foglesong, professor at Rollins College.

He said says when Walt Disney picked the swampy and cheap 27,000 acres outside Orlando in the 1960s for his Walt Disney World complex, he had expansion on his mind. Disney had already built the Disneyland theme park in California. But the Orlando park was bigger, and designers used urban planning details to heighten the experience: “Colors, landscaping were all coordinated towards the end of attracting people and making their comfortable and making them willing to spend their money. You hadn’t seen that before,” Foglesong said.

The Orlando area also offered good road connections and a functional airport, the ingredients to bring tourists from all over the country — and the world. And once Disney World was built?

One of the innovations that keep theme parks attractive in Orlando even in the hotter summer months? Managing crowds with lines that have entertainment and air conditioning. Robert Niles tracks attendance and logistics as editor of ThemeParkInsider.com. He said summer is the second busiest time for the parks, after the week between Christmas and New Year’s. The parks add attractions in the summertime.

The parks offer discounts on summer theme park packages that get visitors cheaper hotel rates and access to the front-of-theme park lines, according to Niles. He said a $150 daily admission ticket could drop to as low as $50 per day depending on how long visitors decided to stay.

“The parks have priced their tickets in such a way that they’re trying to get you to spend as many days with them as possible,” he said.

That’s because visitors tend to make up for the admission ticket price discount by spending money on food and merchandise, and it also keeps tourists from visiting competing parks.

Outside the parks, visitors help to boost the local economy by spending money on souvenirs. Ghazanfar Ali manages the Magic Castle Gift Kingdom, about a twenty minutes drive from the theme parks. The store carries a wide selection of character-themed stuffed animals, tumblers, T-shirts and other merchandise.  Ali said he sees tourists from around the world.

“They come to us to get the souvenirs for their loved ones back home,” he said.

Although the air conditioned theme parks are a huge draw, Florida still has the added attraction that brought tourists here even before theme parks were offering wizards and Jurassic worlds: about 800 miles of beaches that people flock to no matter the season.