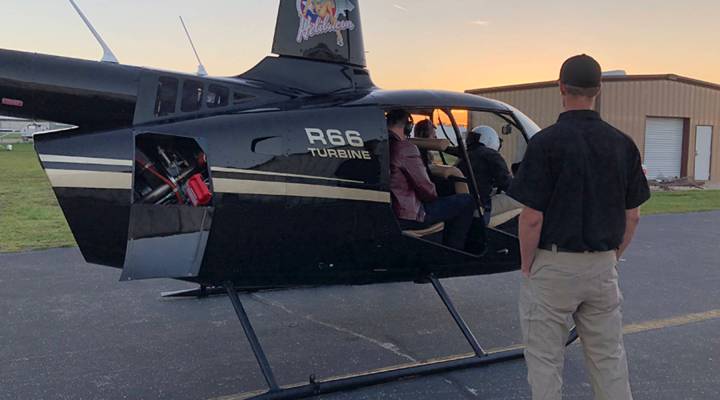 COPY
Coulter Airfield in Bryan, Texas is about an hour and a half northwest of Houston. It's where the helicopter hog hunting business, Helibacon, is based. Andy Uhler/Marketplace

Coulter Airfield in Bryan, Texas is about an hour and a half northwest of Houston. It's where the helicopter hog hunting business, Helibacon, is based. Andy Uhler/Marketplace
Listen Now

Feral hogs cause almost $800 million in annual crop damage across the U.S. according to the United States Department of Agriculture. More than a quarter of that damage happens in Texas – where farmers are spending millions of dollars in trying to mitigate the hog problem.

One of the ways farmers have tried to rid their land of feral hogs is by shooting them from the air. It’s been legal in Texas to hunt invasive species from aircraft for years, but private landowners had to hire a team to do it, which is expensive. All that changed in 2011, when the state legislature passed the so-called pork chopper law, which allowed hunters to pay to shoot feral hogs out of helicopters – and a new business model was born. Soon after the law was passed, Chris Britt co-founded his helicopter company, aptly named HeliBacon.

“Texas made it legal for the helicopter company to sell the gunner seat,” Britt explained. “It’s the exact same activity, it just exists as a viable commercial activity.”

Brett Close and Devin Hursman paid about $4,000 and drove 1,200 miles from North Dakota to Texas to shoot feral hogs out of a helicopter.

A pair of buddies, Brett Close and Devin Hursman, drove a long way to get to Coulter Airfield in Bryan, Texas, where HeliBacon is based.

“It was like 1,200 miles,” Hursman said. Close and Hursman, who live about 10 miles from the Canadian border in North Dakota, are both farmers.

“My wife bought me my half of the trip as a present,” Hursman said.

His half was about $2,000, Close paid for the other half. That $4,000 buys a two-hour helicopter from HeliBacon. The company flies the aircraft and supplies the machine guns and ammo for the hunt.

HeliBacon’s Britt and his business partners all had hunting, firearms and aviation backgrounds, so when the law changed they invested in a helicopter, hoping the idea would work.

More than 100 companies and individuals have permits to hunt invasive feral hogs from helicopters in Texas.

Britt insists HeliBacon is selling an experience. It just so happens they’re helping landowners with their hog problem. The business has to get written approval to fly over private land and shoot at hogs. Most landowners are happy to allow it.

“The private landowner, they’re getting torn up by the feral pigs,” Britt said. “Almost all of them are eager to have us there and they actually request that we fly their properties more often.”

Helicopter hunting is also allowed in Louisiana and Oklahoma. Not to be outdone, Texas passed a bill last year that allows hog hunting from hot air balloons.