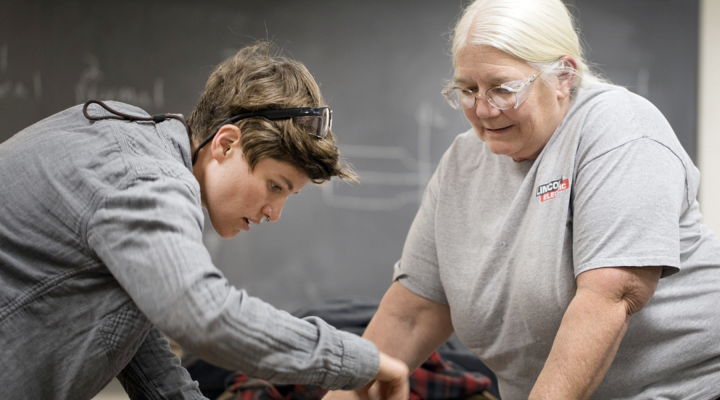 Even though the percentage of women who work in construction is still below 10 percent, the last decade has shown a steady increase of women in the field.  And, with construction workers in high demand, women are finding it easier to find a job in construction nationwide.

But the industry still has a way to go to make sites safer, for everyone in general, but also for women, in particular.

At 28, James Mescall, is a welding student at Austin Community College in Central Texas. She’s eager to join the workforce but a lot of people have been warning her about the challenges ahead. She said one instructor tried to be as frank as possible when he told her she’s “gonna have a rougher time.”

Tamara Crooks with the National Association of Women in Construction said, even with the warnings, more women are training for new jobs in the construction industry. “We notice that the numbers between male and female in classrooms is starting to equal out,” she said, “[now] you have just as many women joining those courses as you have men.”

But there’s limited information about how women fare in the construction industry.  One of the most comprehensive studies on the subject is almost 20 years old. The Occupational Safety and Health Administration  did the study in 1999, and found that 88 percent of women in construction reported being sexually harassed.

And beyond sexual harassment, there are other barriers for women. On construction sites, trades women who work there said some basic equipment still doesn’t meet their needs.

For instance, many sites don’t have a women’s bathroom and women often aren’t allowed to use the men’s port-a-potties. Crooks, with the National Association of Women in Construction, said “there’s still not enough trades women on job sites [to] require a separate [bathroom].”

The numbers don’t support mass-produced safety equipment either; equipment that would be exclusively manufactured with women’s bodies in mind.

For example, heavy-duty work gloves are mostly designed for big hands and that can be a hazard in some instances, said Mary Jo Emrick, a welder who’s been in the industry for 40 years..

Part of her job includes maneuvering a flaming torch, something that’s very difficult to do while your hand is inside an oversized glove. Since welders often set up the beams that support a building, many do their jobs while hanging from those beams. The way the worker would hold their weight is by wearing a snug harness. But most harnesses are not designed for someone who weighs – say – 100 lbs. A small welder is in a lot of danger if the harness is loose, she said.  “[The harness] could slip off of you,” said Emrick.

Even with all the challenges for women, welding student Mescall said she sees a silver lining. “I feel like in this field I can make more money,” Mescall said. She is currently a mechanic. Trades people in construction can easily start with a salary in the six-figure range. And, also unlike other industries, the wage gender gap there is smaller. While women in the U.S. continue to make an average of 80 cents for every dollar men make, in construction, it’s 97 cents.

A version of this article originally ran in the Texas Standard.