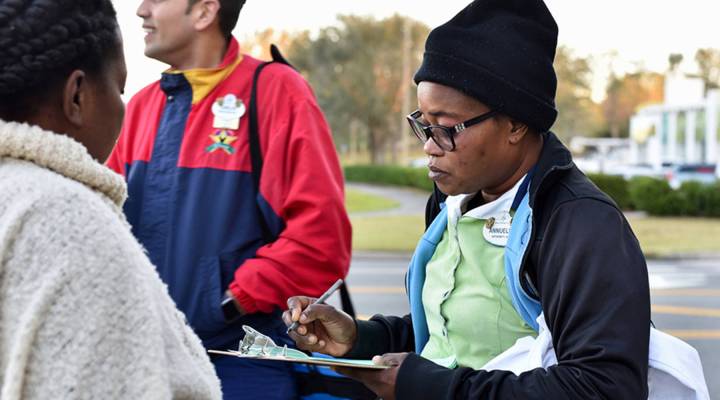 Every morning, hundreds of uniformed workers file into the employee entrance of the “most magical place on Earth” — Walt Disney World, where they are responsible for keeping the resort’s lavishly themed rooms clean and guests happy. This was Wilna Destin’s routine at Disney before being hired by the hospitality workers’ union, Unite Here Local 737. She stands in the employee parking lot entrance one morning, eyeing a group of housekeepers.

“Good morning, do you sign this already?” she points to a clipboard.

The 43-year-old union member is gathering signatures to raise the wages for more than 70,000 employees. But it’s tough, she said, to convince Haitian workers with temporary protected status — like her — to sign the union petition. They are thinking ahead to next year when they will face deportation.

“I know people who want to sell their stuff and go,” Destin said. “Where you going?”

An executive order will end the temporary protected status program in July 2019 for more than 55,000 Haitians living and working in the United States. The TPS program began in 1990 to offer a safe haven to immigrants facing natural and political disasters at home. Many Haitians gained protection after the 2010 earthquake destabilized the country. Florida is home to more than half of the Haitians with temporary protected status who face deportation. Many, like Destin, work in the state’s $111.7 billion hospitality industry.

Wilna Destin says she cannot imagine returning to Haiti after fleeing for Florida on a boat at age 24.

Destin grew up in Thomassique, a small township in central Haiti. She said she fled the country for Florida on a boat 17 years ago, at age 24. She didn’t qualify for asylum at the time, so she got her start working off the books in hotels. She finally received temporary protected status in 2008.

“There is a lot of opportunities, and I go to work and paying taxes and doing whatever I can do and support my family paying my bills. This is what I do for my life,” Destin said.

Her husband also has temporary status. Her 14-year-old daughter and 10-year-old son were born in Florida, so they are U.S. citizens. Destin hasn’t returned to Haiti since she left, though she keeps in touch with her family and sends money back regularly.

“I don’t want to go and leave my kids because those kids, I give them birth. I give them love, you know?” she said.

The Center for Migration Studies of New York estimates Florida has more than 32,000 Haitians with temporary protected status and that 81 percent of them are part of the state’s workforce. Many work in the hospitality industry.

“Everyone who’s Haitian, I would definitely say that they know someone — their neighbor has TPS. Their uncle has TPS,” he said.

Annie St. Fleur, who immigrated to the U.S. from Haiti, is a hotel worker for Walt Disney World resorts in Kissimmee, Florida.

In the past year, the union has been one of the most vocal opponents of the executive order to end TPS. It helped organize a protest in November with hundreds of workers outside President Donald Trump’s estate at Mar-a-Lago.

Members of Congress have expressed a need for a path to citizenship. Republican Sen. Marco Rubio of Florida did not respond to requests for an interview, but he wrote an op-ed piece in the Miami Herald in November calling on the Trump administration to extend TPS for Haitians, saying our nation has benefited from their presence.

The Florida Restaurant & Lodging Association lobbies on behalf of the state’s hospitality industry. Erin Hellkamp Power, the group’s press secretary, issued a  statement in response to questions about TPS:

“As this is a developing national issue, it is difficult to determine the precise impacts of the policy at this time. Florida’s hospitality industry proudly supports 1.4 million employees and continues to be one of the top job creators. As the population and diversity of the Sunshine State continues to grow, and the number of visitors continues to rapidly rise, the industry’s demand for labor also increases,” the statement said.

Disney did not respond to a request for an interview.

Union leader Paquette said he thinks the number of Haitian hospitality workers affected overall — 32,000 out of more than 1 million in the state — may not be enough to hurt a large company like Disney.

“It’s a massive impact to the community of Haitians, but it is a drop in the bucket to the company,” he said.

And Paquette pointed out that the hospitality industry in Florida has a new source of labor: Puerto Ricans who’ve left the island after Hurricane Maria.

Correction (Feb. 21, 2018): An earlier version of this story misstated the ages of Wilna Destin and her son. The text has been corrected.