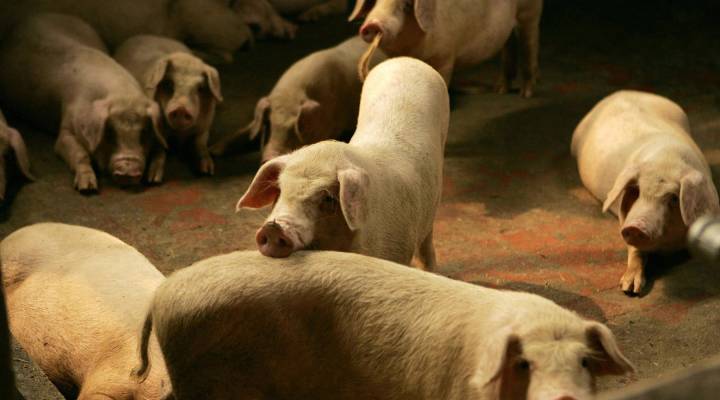 Did you know it’s a federal crime to release a bird into a house in order to scare another bird out of the house?

We wouldn’t without the Twitter account @CrimeADay. For the past few years, Mike Chase has combed through the thousands of laws Congress has passed that have criminal consequences, and the hundreds of thousands of regulations that federal bureaucrats have written to implement those laws. Then he tweets about one obscure federal crime every day.

“This one is one of my favorites,” Chase said. “It’s a federal crime to sell a pig carcass if it has a ‘pronounced sexual odor.’”

But if the sexual odor is anything less than “pronounced,” you can sell it as food.

“Unfortunately what that means is that there is a guy whose job is to go in and go ‘oh yeah, that’s a sexual odor, but I don’t know, I wouldn’t say it’s pronounced,’” Chase said. “It’s the sort of the sommelier of sexual pig odor.”

So, why does Chase know all this? Because by day, he’s a white collar criminal defense lawyer in Hartford, Connecticut. He works at a big corporate law firm, defending people accused of federal crimes, like financial fraud.

In general, you should divide crimes in to two categories, he said. They actually come with fancy latin names: malum in se and malum prohibitum.

Malum in se are serious-sounding crimes, they’re wrong because most people see them as inherently morally wrong.

Then there’s the malum prohibitums, which Chase says describes a lot of the rules he’s been collecting. Essentially, they’re wrong because someone says so.

Chase argues that the U.S. has so many trivial-sounding rules on the books that it can be easy to confuse the serious crimes with the silly-sounding ones. This whole issue has earned its own buzzword, “over-criminalization,” and attracted some powerful corporate backers.

But what if the silly and the serious aren’t necessarily that far apart? Let’s take that rule about pig carcasses with a “pronounced sexual odor.” It’s actually a very real issue for the pork industry.

Between 10 and 20 percent of uncastrated male pigs have, well, the technical term is “boar taint.” It’s pheromones, which animals produce when they come into heat. Walter Jeffries, a pig farmer in rural Vermont, told us “sexual” doesn’t really do the smell justice.

“Go grab a guy and have him sweat on an undershirt for you real well, and that’s the smell,” he said. “To me it smells like shit and armpits.”

You still might be wondering though: Why did the government have to get involved? If people don’t want smelly meat, they don’t have to buy it, right? But here’s the thing: You can only smell boar taint when the meat is warm, not when you buy it refrigerated at the store.

So an unscrupulous pig farmer might be tempted to sell a little tainted meat, knowing  it’d go unnoticed until some unsuspecting bacon-lover goes and cooks it. If enough sexual-smelling pork gets in to the pork supply, people are just going stop buying pork.

Which is where title 21, sections 610 and 676 of the U.S. code of statutes, and title 9, section 311.20 of the Code of Federal Regulations come in. If you’re caught selling a pig carcass with a pronounced sexual odor, you could face up to a year in prison or a $1,000 fine. It’s a crime, one that’s maybe not quite as ridiculous as it first sounds.

Still, there’s a movement of people who have spent considerable time and energy bringing attention to the number of silly-sounding regulations on the books with criminal consequences.

“We’re over using our criminal justice system,” said Mark Holden, senior vice president and general counsel of Koch Industries, the multinational company owned by brothers Charles and David Koch. “These are not acts that people would necessarily understand by doing it, it’s something illegal.”

(We should mention here: Koch Industries has supported Marketplace programming in the past. Underwriters have no influence on our journalism.)

Holden says he and his bosses, the Koch brothers, see the number of regulations with criminal sanctions as a case of government overreach.

“There was a guy that was charged with — I think it was Clean Air, Clean Water Act violations — because he let go a bunch of balloons after he had become engaged to his fiancée,” he said.

The Kochs first got involved in this issue they call  “over-criminalization” almost two decades ago, Holden said. In 2000, Koch Industries and four employees at one of its oil refineries in Texas were charged with 97 counts of federal crimes involving regulations of benzene, a chemical known to cause cancer.

The employees faced up to 35 years in prison. In a settlement, all the charges but one were dropped, and a Koch subsidiary pleaded guilty to one count. It admitted to covering up how much of the carcinogen was being released by the refinery, not far from where people lived. The company paid $20 million in fines and environmental clean up. No one went to prison.

“Maybe some of the groups on the left, maybe for whatever reason they want to see people go to prison who have issues with pollution or what have you,” Holden said. “[But] in our society we have a system — We have civil, we have regulatory, and we have criminal. We need to stop overusing criminal sanctions.”

Since that oil refinery case, the Koch brothers have spent a lot of money pushing for criminal justice reform. Some efforts have been bipartisan, including a campaign to reduce mandatory minimum sentences for low-level drug offenders.

The Kochs argue there are too many regulations that could make accidental criminals out of everyday Americans, but critics warn that effort could make it easier for big corporations to break rules meant to protect the public.

“Let’s be clear, for corporate America, you’re gonna be a lot more reluctant to put public health and the environment at risk if you might go to jail,” said David Uhlmann, a law professor at the University of Michigan. He spent many years prosecuting environmental crimes at the Department of Justice, including the Koch oil refinery case.

“Outside of the law school classroom and Latin class, you know, the world doesn’t break out into mallum in se and malum prohibitum,” he said. “I mean, dumping hazardous waste was completely lawful until 1976 when Congress made it a crime, because we had hazardous waste sites across America badly contaminating our communities, so I suppose at the moment Congress made it a crime it was malum prohibitum … but it seems to me to be inherently wrongful to dump a bunch of hazardous waste.”

For Uhlmann, what we think of as inherently right and wrong is partly shaped by the government rules we have, and the consequences that come with them.