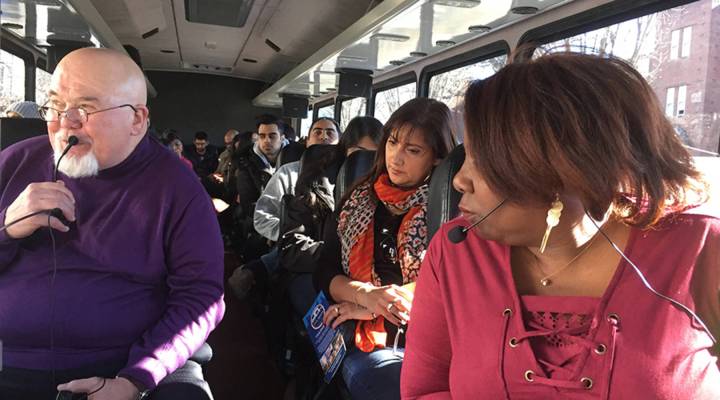 COPY
Tom Houck runs a three-hour in-depth civil rights tour in Atlanta. It's one of several across the South. Renata Sago/Marketplace

Tom Houck runs a three-hour in-depth civil rights tour in Atlanta. It's one of several across the South. Renata Sago/Marketplace
Listen Now

Tom Houck leaned toward a window at the front of his coach bus and pointed to the Dr. Martin Luther King Jr. National Historic Site on Atlanta’s historic Auburn Avenue. His audience, some 40 college students, peered out at King’s childhood home, his church, his and his wife Coretta’s burial grounds and other landmarks.

“It’s so delightful to have you on our tour,” Houck belted from a wireless headset microphone. “You are in the megacenter of history.”

Houck’s three-hour civil rights tour kicks off on Auburn Avenue and passes by Atlanta’s historical black colleges, its city hall and the Georgia State Capitol. He details key moments and institutions in the civil rights movement, including the headquarters of the Southern Christian Leadership Conference and the Student Nonviolent Coordinating Committee. There’s even a singer who performs live freedom songs. He launched the weekly tour in 2016.

“I was interested in showing people around Atlanta, the historic sites of Atlanta, and there wasn’t anybody doing it,” Houck said. “The more and more I talked to people about it, the more and more people liked it.”

The 70-year-old longtime Atlanta resident is not just any guide. He was the King family’s driver for years and gives his firsthand experiences. He estimates 20,000 people have paid the $65 fee for his Saturday public tours. He also conducts private tours for groups.

“I’ve had Catholic groups. I’ve had a lot of the AME church’s groups, a lot of family reunions in the private tours. The public tours, it’s a mix from all over the country. It’s not just black folks. It’s not just white folks,” he said.

In the past few years, Atlanta’s grown its civil rights tourism industry. That includes entrepreneurs like Houck and new institutions like the National Center for Civil and Human Rights. Visitors there watch historic news footage and learn about civil rights around the world. The Atlanta Convention and Visitors Bureau also now promotes a civil rights itinerary.

The trend is spreading around the South. Mississippi just opened its first civil rights museum. Fourteen states are about to launch the U.S. Civil Rights Trail with the National Park Service. This month, the Dr. Martin Luther King Jr. National Historic Site in Atlanta was upgraded to a national park.

“You know, there were numbers to say that if you build it, they will come,” said Laura Mandala, who heads the market research firm Mandala Research.

“Our study demonstrated quite clearly that African-Americans as a travel population were very interested in looking at sites that reflected their history,” she said.

The business of engaging with that story doesn’t end with tour buses and entrance fees, either. It means revenue from restaurant meals, hotel rooms and conference bookings.

The Dr. Martin Luther King Jr. Center for Nonviolent Social Change is King’s burial place and a research library. Carmen Luisa Coya-van Duijn, with center, said the appeal of civil rights tourism specifically around King isn’t just about the past.

The Dr. Martin Luther King Jr. National Historic Site is one of several sites across the South drawing more than 1 million tourists every year.

“With the state of our world today, Dr. Martin Luther King Jr. — his philosophy and methodology of nonviolent social change — has been more relevant than ever. People are thirsting for justice and peace.”

Coya-van Duijn expects the 50th anniversary of King’s assassination in April to draw even more visitors from across the country and the world.