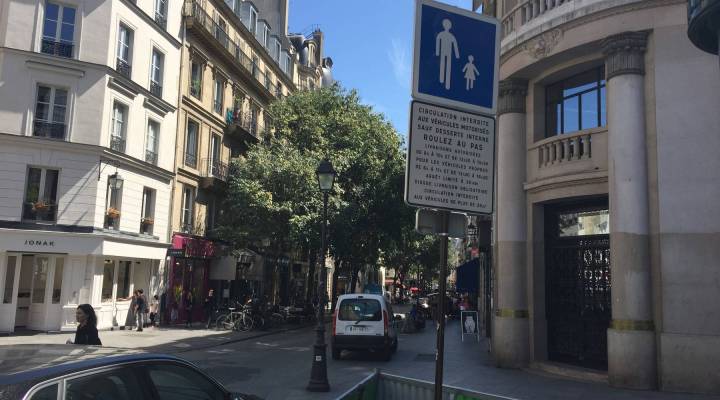 Paris is gaining a reputation as a city that’s putting the brakes on cars. It has already banned the most polluting cars and turned part of a riverside expressway into a leisure zone. Now, some new measures aim to make it even more pedestrian-friendly.

The Marais, one of the oldest parts of the city, is going to become one of Paris’s new pedestrian zones. City officials just finished building the first stretch of a mega-cycle lane here at the entrance to the tangle of narrow, Medieval streets. Soon, only emergency service, delivery and local residents’ vehicles will be allowed in.

“With the extension of tourism and the booming of visitors, if you don’t change the way you go through the city we will die because we cannot breathe we cannot just walk — it’s just impossible!” said Christophe Girard, mayor of Paris’s 4th Arrondissement that contains the Marais.

In addition to the pedestrian zones, there will be:

Parisians like Clothilde Regnier are in favor. “We need to have more pedestrian areas in Paris because of the noise, because of the pollution,” she said as she took one of Paris’s Vélib‘ public city bikes off its stand.

But some stores are concerned the new measures will hurt business. Some out-of-towners are skeptical too. “People who live in the ‘burbs are being pushed out of the city. These people need their cars to get in and out of Paris, especially at night. So they are no longer coming into town to go to a restaurant, a play or a concert,” said Pierre Chasseray, managing director of the 40 Million Drivers lobby group.

Despite any concerns, Paris is on a clear course to move another step beyond the age of the private car.