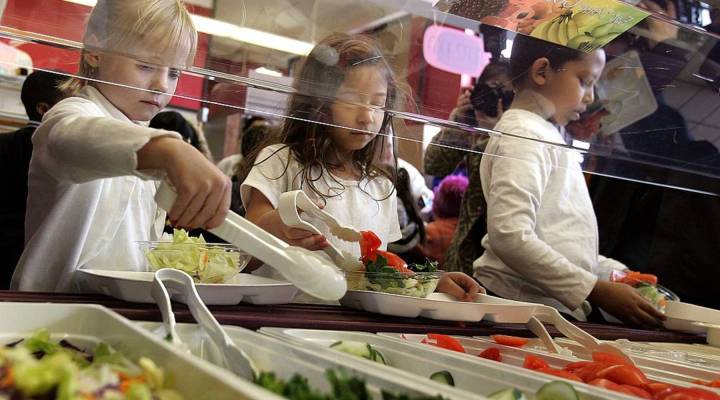 COPY
Students at a Chicago elementary school dig into a salad bar in the school's lunchroom. Tim Boyle/Getty Images

Students at a Chicago elementary school dig into a salad bar in the school's lunchroom. Tim Boyle/Getty Images
Listen Now

Bethany Staples’ son was going through the lunch line at Auburn High School, near Seattle, a few years ago. When he got to the end of the line and punched in his number, the cashier told him his account was empty.

“Then she snatched the tray out of his hand,” Staples said. The cafeteria worker then threw the meal in the trash and handed the boy a milk and a cheese sandwich.

“They call it a sandwich,” Staples said, “but it was just two pieces of white bread with a piece of processed cheese in the middle.”

The practice is common enough that it’s got a name — lunch shaming — when parents have unpaid bills but the kids pay the price. This school year, the U.S. Department of Agriculture is requiring all districts to have policies in place, making it clear to parents how schools will respond in those situations.

About three-quarters of school districts surveyed by the School Nutrition Association had unpaid school meal debt at the end of the 2015-2016 school year. Yet only about half had formal districtwide policies for responding to children without money to pay for lunch.

At Brooklyn Park Middle School, outside Baltimore, parents get a robocall every night warning them if they have a negative balance. Kids get to charge up to five hot meals before food service manager Rose Bennett pulls them aside.

“Then I’ll talk to them, and I’ll give them a cheese sandwich,” Bennett said. “You want to take money out of your pocket, and you know you can’t do that.”

Rose Bennett is a food service manager at Brooklyn Park Middle School, where children are allowed to charge up to five hot meals.

The new policies vary by district, said Diane Pratt-Heavner, spokesperson for the School Nutrition Association. Most schools allow children to charge some meals or provide an alternate meal, like a cheese or peanut butter sandwich, she said.

“But the first and foremost effort that we really see consistently across the country is trying to avoid the alternate meal altogether,” she said.

Schools do that partly by making sure every child who qualifies for free and reduced-price lunch through the federal government is signed up.

Michael Wilson is director of Maryland Hunger Solutions, which is pushing the state to pick up the difference between free and reduced meals.

“The kids in the reduced-price category are facing the biggest challenges because they are the near poor,” he said. “They are the kids who are most likely to skip school meals because they can’t afford it or because they have school bills.”

More than half of high-poverty schools are now avoiding the problem altogether by serving all their kids free meals through a provision of the 2010 Healthy, Hunger-Free Kids Act.

Staples, whose son’s lunch was thrown away in Auburn, Washington, qualified for free lunch at the time, but hadn’t realized she needed to reapply.

The district’s policy is not to throw away meals, said child nutrition director Carol Barker, though cafeteria workers may remove a hot entree from a tray if a student has a negative account balance.

“We don’t want any of our children to be embarrassed because they don’t have money,” she said. “We realize this is a parent problem, not a child problem.”

To help avoid embarrassment, this year her district is reversing the lunch lines in its elementary schools so that kids see the cashier first and know what kind of meal they get before they go through the line.