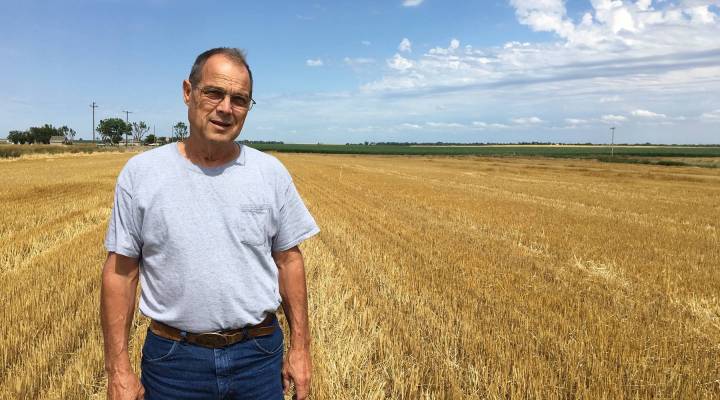 COPY
Tom Giessel is a Kansas wheat farmer who harvested 1,800 acres of wheat in late June. He stands here in his field near Larned, Kansas.  Peggy Lowe for Marketplace

Tom Giessel is a Kansas wheat farmer who harvested 1,800 acres of wheat in late June. He stands here in his field near Larned, Kansas.  Peggy Lowe for Marketplace
Listen Now

Tom Giessel is a fourth generation farmer near the city of Larned, Kansas, who considers his commodities to be his currency.

Giessel had a fine crop this year, thanks to the good weather in central Kansas. After his landlord took a cut, Giessel made $240 dollars an acre. But, he figures that one acre can’t buy even one bag of seed corn, his second crop this summer, because it costs $300.

“I used 500 acres of my total wheat crop just to buy that corn,” he said, “let alone any fertilizer, herbicide, machinery, my time.”

Farmers, in particular those producing grain, are struggling, thanks mostly to low commodity prices amid a global grain glut. The U.S. Department of Agriculture said net farm income is down for the fourth straight year, cut in half since 2013.

Giessel is struggling to cover his expenses and the farm is not making a profit, he said.

“We’re running on empty,” he said. “The farm crisis is real.”

Fearing the worst, the National Farmers Union in May set up a farm crisis web page with information about loans, mediation, disaster relief and a suicide prevention hotline.

Bill Watson, president of the Agribusiness Division of UMB Bank, a top-20 farm lender based in Kansas City, agrees that the agricultural economy is stressed, but doesn’t use the term “crisis.”

“Crisis is a very personal concept,” Watson said. “What’s a condition for someone else might be a crisis for me.”

Watson remembers a worse time. In the 1980s, thousands of farmers lost their land, agricultural banks failed and Main Street businesses went belly up. There are a couple of big differences between back then and today: farmers carried a lot of debt in the 1980s and interest rates were very high, unlike the low rates today.

Yet Watson agrees that farm income is a problem – and after four consecutive years of losing money, some small- to medium-sized farmers may be looking at the possibility that they may fail to make payments on equipment or land.

“That’s when things really start to change for you,” Watson said. “So I would submit to you that that’s a definition of a crisis.”

David Widmar, an agricultural economist at Purdue University in Indiana, who writes the Agricultural Economics Insights blog, describes the downtown in the agricultural economy as an “adjustment” and said it differs from the 1980s.  Back then, exports had dried up, he said, thanks to the Soviet Union embargo.

“Agricultural exports I wouldn’t say collapsed, but severely pulled back,” Widmar said. “And we haven’t seen at this point a significant drop or pull back in demand to those 1980 levels.”

Overseas sales today are steady, but some worry that President Trump undoing the Trans Pacific Partnership and strong talk about renegotiating NAFTA will change that.

Giessel sometimes wonders whether he should retire early and worries that other guys his age may be thinking the same.

“I’m losing money,” he said. “So that means if it goes two years this way, then I have to work another four or five years to get back where I’m at today. So why carry on?”