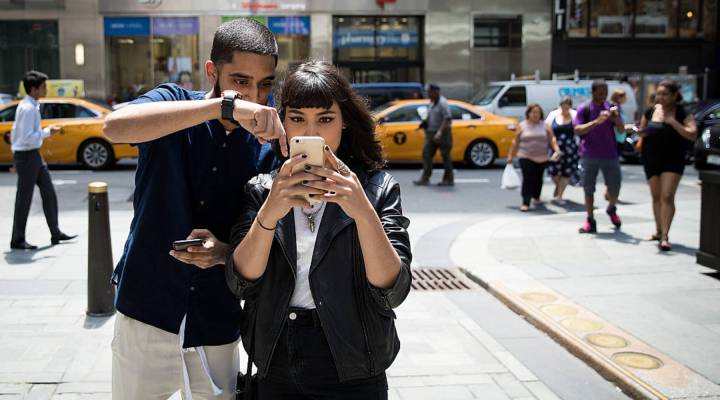 COPY
(L to R) Sameer Uddin and Michelle Macias use their smartphones outside of the Nintendo store in New York City.  Drew Angerer/Getty Images

(L to R) Sameer Uddin and Michelle Macias use their smartphones outside of the Nintendo store in New York City.  Drew Angerer/Getty Images
Listen Now

Sherri Littlefield wants a phone number with the 212 area code.

“I think if people saw that, they would just immediately know, ‘Oh, she lives in New York City,’” Littlefield said.

Littlefield is sitting on a brown leather couch at Foley Gallery, a contemporary art space on Manhattan’s Lower East Side where she’s associate director. Behind her is a photo of a pink rose, frozen in liquid nitrogen and shattered.

The gallery has a 212 number. But in her side gig, curating art shows, Littlefield uses her personal cell phone with area code 321 from Florida. She thinks a 212 would get her more business.

“It’s kind of goofy,” Littlefield said. “And I get that. But I think it carries prestige in the way, you know, an apartment off Fifth Avenue would.”

This month, Manhattan is getting a new area code: 332. Meanwhile, phone numbers with the borough’s original area code, 212, have become a status symbol. But you’re about as likely to get one from your phone carrier as you are to land a Fifth Avenue rent-controlled apartment.

To explain why, let’s go back to where a phone number begins its natural life, at private entity called the North American Numbering Plan Administration. It comes up with the area codes for North American countries.

“We’d like to think there was some wild and crazy way [to] how we determine what the next area code would be,” said John Manning, senior director at the administration. “Quite frankly, it’s fairly simple.”

A team sits down and picks a number. Sometimes they come up with clever ones, like 321, Littlefield’s area code from Florida. It covers the area from which NASA rockets lift off.

If you do the math, there are about 8 million possible telephone numbers for each area code. The administration divvies the numbers up among phone companies like Verizon and Comcast. Those companies pass the numbers along to you. Eventually, they run out. And the only way to get one of these numbers from the phone company is if somebody else gives one up.

As so often happens in our economy, when there’s a need, someone figures out how to meet it. There are websites devoted to selling 212 numbers. You can also find people selling them on eBay and Craiglist, for hundreds or even thousands of dollars.

One website, RingBoost.com, sells phone numbers, mainly to businesses. Its cheapest 212s are $175. Its most expensive? Almost $30,000. The price depends on how memorable the numbers are.

Some people buy the numbers as collectors’ items, said Paul Faust, the company’s vice president of business development and a New Yorker himself.

“I had a guy maybe a year ago that bought three of ’em because he wanted his kids, who were like 1 and 2 years old, to have them when they got older,” he said.

“We get them from people who are moving out of New York that just don’t want their numbers,” he said, or, for instance, “a company that had a bunch that is going out of business, closing, and, you know, might want to get rid of them.”

Ringboost parks thousands of phone numbers in an account with a phone company and then waits for them to be bought. The company doesn’t technically own these phone numbers. It owns the rights to use them. That’s just how phone numbers work.

Littlefield, from the art gallery, has thought about buying a 212 number online, but she’s worried about getting too many phone calls from people looking for the previous user.

“I do find myself revisiting the website, even adding the number into my shopping cart sometimes, but I just can’t commit to doing it,” she said.

In the meantime, she may ask her boss to sell her the company fax number.