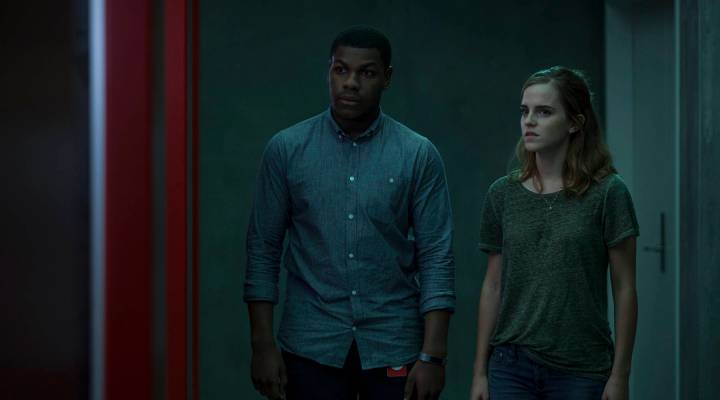 There’s a movie opening this weekend that’s going to strike a little too close to home for some people in this crazy, mixed-up, always-connected digital economy we live in.

Tom Hanks and Emma Watson star in “The Circle,” a story about the dark side of revealing all online. It’s based on a book of the same name by Dave Eggers, in which a mega-tech company wants access to all of our lives.

Kai Ryssdal spoke with Eggers about how an unread email got the story rolling, the precarious state of online privacy and why he’s still optimistic people will do the right thing when it comes to setting digital boundaries. Below is an edited transcript of their conversation.

Kai Ryssdal: So what was going through your mind when you wrote this novel, when you brought it out in print in 2013?

Dave Eggers: I think the thing that created the real impetus was one day I saw a friend on the street who said — he’d emailed me a few days before — and he said, “Hey, how come you haven’t answered my email?” And I did the usual white lie, “Oh, I haven’t gotten it yet. I didn’t check my email.” And he said, “Oh, I happen to know that you did get my email and that you opened it at 4:13 last Tuesday, and I have software that allows me to know when my mail has been opened, and I want an answer, why you haven’t answered my message.”  And I thought, well, you know that among so many things indicated a real sort of change in what I think we saw as the pure ideals of a connected world … sort of how it alters our, I don’t know, our moral fiber in a way.

Ryssdal: Do you think it does? I mean it’s interesting to me that that guy called you out and said “Oh no, I know you’re full of it man.”

Eggers: Well, that’s the thing is that it had altered him. The ease with which we can surveil each other alters what otherwise is normal relationships. You know, it creates spies in all of us. I mean people spy on their kids, they spy on their spouses, they spy on their friends, you know, actively, passively. So the book was exploring a lot of those themes, kind of creating a worst-case scenario.

Ryssdal: It’s not really a cautionary tale, right? It’s a “This is what we’re living now tale.” Both the book and the movie.

Eggers: Yeah, it’s moving a lot faster than I thought. And there’s not really a lot of speed bumps along the way. And then when we just had the rollback of some of the regulations —you know, the ISPs … they can buy and sell our search histories. You know, the regulations that Trump just rolled back — it’s very disturbing. I think that there needs to be a real pause. You know, why in the digital realm was privacy or surveillance — why was surveillance baked in?

Ryssdal: So here comes the deeply cynical answer, but it turns out that way in the book in the movie right? The reason we don’t have any privacy is because people can make money off of our not privacy.

Eggers: So, many of my friends, you know, did well in technology and created some amazing tools. What I didn’t see coming, and I think what was very disturbing, is that surveillance part that was baked in. Who’s collecting data on who? And who’s monetizing it? And who has control of it? And who’s storing it? All of these things make what could have been a beautiful thing into, I think, a very creepy and increasingly creepier machinery. And I don’t know, I think that we need to examine and think about what do we really want?

Ryssdal: People are going to watch this movie though, and they’re going to look at that giant company at the heart of it that gets to the transparency and the privacy thing as a central plot point, and they’re going to try to puzzle out which company maybe you were talking about — or maybe you’re talking about all of them. But I’ll just, I’ll just throw out the fact that Mark Zuckerberg of Facebook has said that privacy is not a social norm anymore.

Eggers: Yeah, I thought that was an odd statement. I have to say, it has no basic basis in human history. We’ve always had privacy, and it’s always been integral to what makes us individuals. Right now all of these things — what you want and what you search for and what you’re looking at — all of these things are monetized, and they’re no longer private. So that’s one small step away from the elimination of the privacy of the mind. I say all this while I’m an optimist, so I always feel like I think ultimately people will do the right thing and demand, you know, some boundaries here. Who knows where it will go.