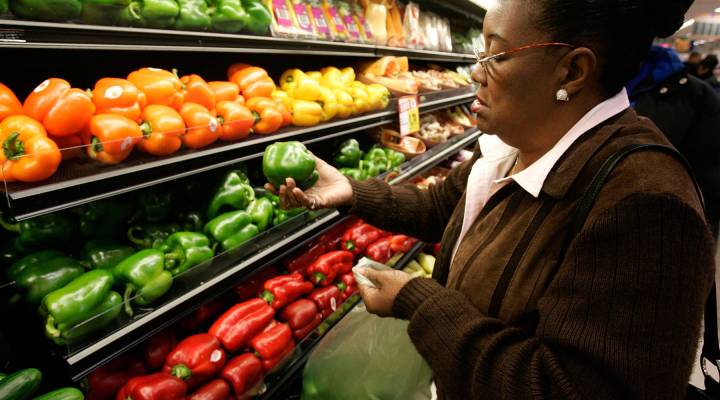 Kathy Curry of New Orleans buys bell peppers to stuff, a signature New Orleans dish. The USDA says the rise in pepper demand is due in part to a wider range of recipes calling for them. Alex Wong/Getty Images
I've Always Wondered ...

Kathy Curry of New Orleans buys bell peppers to stuff, a signature New Orleans dish. The USDA says the rise in pepper demand is due in part to a wider range of recipes calling for them. Alex Wong/Getty Images

Why on earth are green bell peppers always cheaper than red, yellow or orange bell peppers?

The simple answer is that green bell peppers are unripened red, yellow or orange bell peppers. They often cost less to produce, which makes them cheaper.

“The colored peppers — red, yellow, orange — are actually the mature stage of green bell peppers that have been allowed to ripen on the vine,” explained Suzanne Thornsbury, a cross-commodity economist in the crops branch of the U.S. Department of Agriculture. The amount of time that peppers spend on the vine does not affect just their color, but also their taste. “Bright colored peppers tend to be sweeter than green peppers because the sugar content increases as the pepper matures.”

“Yes, costs [of colored bell peppers] would typically be higher. But there will be demand factors that impact price as well  — [such as] more people buying colored peppers,” Thornsbury said.

This brings us to the longer explanation about why green peppers are less expensive, which takes into consideration demand, supply and cost.

Back in 2001, the USDA released a report titled “Sweet Peppers: Saved by the Bell” that found that about one in four Americans ate at least one food containing a bell pepper and about one in ten people ate a fresh market bell pepper each day.

The report also found that up until 2000, the demand and consumption of bell peppers continued to climb. That year, Americans consumed an estimated 2.2 billion bell peppers — that’s up 80 percent from 1990. The USDA attributed this to more people eating out, more people recognizing that fruits and vegetables are good for you, a wider range of recipes that included bell peppers as an ingredient and increased availability of colored peppers.

The domestic production of bell peppers could not quite keep up with the demand. And so in 1990, “a wide range of colored bell peppers was imported from the Netherlands,” followed by other countries, according to the USDA.

“To get a yellow, red or orange pepper, the pepper needs to spend more time on the plant to ripen and color. The older the pepper, the greater the chance of some damage coming to the pepper,” explained Karl Foord, who teaches horticulture at the University of Minnesota Extension. “So growing colored peppers can cause a yield reduction leading to a higher price.”

Some of the damaged peppers can still be sold “but at a significantly reduced price,” Foord said.

The damaged peppers are a cost incurred by the growers, who have tried to come up with ways to reduce the damage.

“Some farmers I know grow peppers in high tunnels where they are protected and can come to the market a month or so earlier than peppers grown in the open field,” Foord noted. “So the timing is such that when the peppers begin to come in from the field, they leave the remaining peppers on the plants in the high tunnel to ripen. In the tunnel, they are better protected, reducing the chance of damage and allowing for the higher price received from the colored peppers at the market.”

So there you have it: Bell peppers get sweeter — and more colorful — with age. Just like fine wine. That’s why you are paying big bucks for the sunset-colored ones.