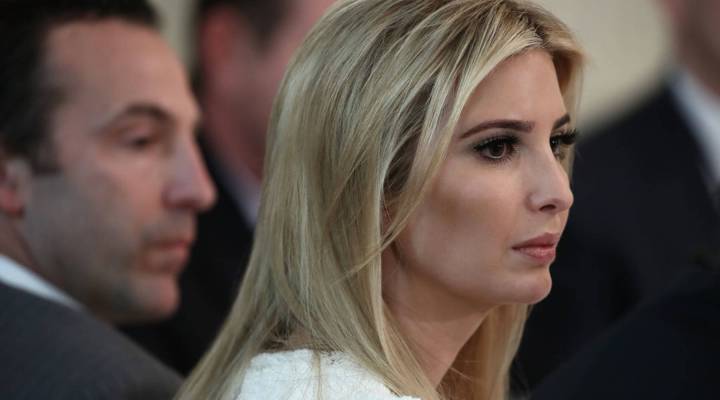 COPY
Ivanka Trump participates in a listening session with manufacturing CEOs in the State Dining Room of the White House. Win McNamee/Getty Images

Ivanka Trump is taking on an official role as an unpaid assistant to the president, a job that comes with a West Wing office and a security clearance. Security clearances can be difficult and particularly time consuming to get for most people, but they aren’t exactly uncommon.

There’s a whole segment of the job market reserved for people with security clearances, even job search sites tailored specifically for those already holding clearances of various levels.

“I think most people think of security clearance jobs, they immediately think of James Bond, you know, cloak and dagger kind of stuff,” said Evan Lesser, president of ClearanceJobs.com, which lists about 25,000 openings. “But, in reality, the bulk of clearance jobs are pretty ordinary.”

Lesser said most jobs requiring a security clearance are in fields like information technology, finance, accounting and engineering. Jobs like that of Peter Gadomski, a research physical scientist with the Army Corps of Engineers’ Cold Regions Research and Engineering Laboratory.

Gadomski said there are some projects he can’t work on because they involve data or facilities that require a security clearance. So he filed for one last fall. The form to apply is more than 100 pages long.

“I did have to spend probably a day and a half in terms of filling out paperwork, figuring out where I’ve lived for the past 10 years, which has been a lot of different places,” he said.

After the application, there are the interviews. Government investigators contact friends, co-workers, maybe even people you forgot you knew. It’s a long and involved process while the government ferrets out whether you can be trusted with sensitive information.

Little wonder that there’s a backlog of about half a million pending investigations, and the waiting time if you are approved is anywhere from a couple months to a couple of years.

And, right now, with a deluge of new Trump administration officials, the line slows down even more.

Eric Hu works for a defense contractor and has several people waiting on clearances.

“It just takes a lot longer during the administration years because there’s usually a large influx,” he said, pointing out this is the case each time a new president comes into office. And presidential hires get to cut the line.

While he’s waiting, Hu said he has something of a “chicken and egg” problem. The nature of his company’s work requires him to hire people with security clearances, but you generally can’t get a security clearance unless you already have a job (or a job offer) for a position that needs one.

So he focuses on people who are already cleared.

A clearance can cost anywhere from a couple thousand dollars for a low level one to more than $10,000 for top secret access. Employers sponsor the clearance request and pay the associated fees, but the payoff for the employee of having a clearance isn’t quite what it used to be.

“Five or six years ago, most security-cleared professionals were able to command an average of 10 to 20 percent more in salary than their most equivalent non-cleared counterpart, ” said Lesser of ClearanceJobs.com. “But now that the economy has improved, unemployment is low, wages are increasing [and] the premium for having clearance really has been reduced these days. While having clearance may grant you more job security than an uncleared person, it doesn’t necessarily translate into better pay.”

Even so, having a security clearance signals to potential employers that the government thinks someone is trustworthy — and patient — which can be helpful on a resume.